HEY SCOTT, BINWIN ISN'T THAT FUCKING INTERESTING. HE'S A FUCKING LAME ARCHETYPE - THE SIMPLEMINDED VIOLENT HARD DRINKING DWARVEN FIGHTER. HE'S LIKE THE DWARF FROM DRAGON'S CROWN HAD A RETARDED BROTHER.
Click to expand...
How many projects did he half-ass or just plain abandon in favor of that fucking dwarf? Quit trying to make Binwin happen. It's not gonna happen.

#6,093
Reactions
968 73 2
DarkAudit said:
How many projects did he half-ass or just plain abandon in favor of that fucking dwarf? Quit trying to make Binwin happen. It's not gonna happen.
Click to expand...
As much as I dislike Binwin, it's clear that he'd rather be doing Table Titans full-time instead of doing PVP, TT, and Binwin's Minions all at the same time. That's where all his effort and talent goes.

Honestly? He should end PVP. Wrap it up. Then we can stop talking about him and he can actually do something he cares about.

#6,097
Reactions
525 66 0
If he wants to keep PvP going, he should farm it out to another creator. He could then focus on his preferred project, and maybe rebuild his audience as his strips start updating regularly.

Staff member
#6,098
Reactions
7,757 1,658 33
Does he even actually do anything at table Titans? Last I'd heard he farmed it out to another artist, which is why it's actually worth reading. And yeah, even Valeria bronzebottom is the least interesting thing in that strip, often even more annoying than Alan the asshole.

#6,099
Reactions
1,473 304 5
Frank said:
Kurtz has an interview on a D&D youtube channel I like and 6 minutes in he's already bitched about so much, including how fake he finds Critical Role. What an unpleasant man.

I get the feeling Kurtz doesn't actually like D&D

Also, part of character creation is making a character that contributes to the group.

"Why do we have to play out fighting these goblins?" BECAUSE THINGS CAN HAPPEN THAT AREN'T EXPECTED. Expending too many arrows or breaking a weapon, or being unlucky and having to delay moving on, can actually enrich an adventure. It means you have to change your approach for something else. Not every time, very often you will just mow through them - but neither you nor the DM know exactly what's going to happen. Failure is always an option.

And no, Kurtz doesn't like D&D. He doesn't even really like gaming. He likes half-assing things and trying to be the center of attention.

Also, part of character creation is making a character that contributes to the group.

"Why do we have to play out fighting these goblins?" BECAUSE THINGS CAN HAPPEN THAT AREN'T EXPECTED. Expending too many arrows or breaking a weapon, or being unlucky and having to delay moving on, can actually enrich an adventure. It means you have to change your approach for something else. Not every time, very often you will just mow through them - but neither you nor the DM know exactly what's going to happen. Failure is always an option.

And no, Kurtz doesn't like D&D. He doesn't even really like gaming. He likes half-assing things and trying to be the center of attention.
Click to expand...
I think the reason he liked Ultima Online back in the day was simply because he could go off and do what he wanted, whether that was shearing sheep or pretending to be a bard at a tavern. Not liking the crunchy bits of a game is fine (god knows I've played MMOs I couldn't stand the combat in) but D&D is -defined- by it's crunch. The problem is that Scott wants to be something OTHER than an adventurer, but is attached to the one property where he MUST be an adventurer.

Quite possible there'll be two updates at once Monday, with one of them backdated to this week - he's done it plenty of times before

#6,106
Reactions
303 165 2
i feel like with something as old as vgcats there is no shame in saying "taking a break to do other things." I wouldnt be mad, whatever makes you money/happy.

#6,111
Reactions
2,877 827 25
Dave said:
Holy shit the guy makes over $2K a month drawing this shit. Ugh people are fucked up.
Click to expand...
Rule 34 gonna keep on 34’n.
Also Furry folk not only pay, they pay on time... and even tip. So when debating whether to draw for a clientele that is polite and actually willing to work with an artist, is it any wonder they say yes?

Though I acknowledge that my experience is not necessarily universal. As the wise Sovietwomble once said, when you have a particular kink, it's hard to find the content without paying for it. There's a niche market for everything, and it costs.

#6,116
Reactions
2,877 827 25
The article I linked earlier talks about how the usual thing to do with a commissioned work is to get it done and then spread it around for free. I suspect the reason this is less of a worry with the Furry crowd is that someone commissioning such a work is going to have a much more personal connection/investment in the finished product, and is therefore less likely to plaster something that intimate all over the place.

#6,117
Reactions
1,305 429 11
Null said:
His lack of widespread success is due largely to his poor work ethic. His strips are frequently late or missing altogether, his humor is getting kind of dated and increasingly niche, he falls back on too many unfunny running gags / recurring characters, he more or less refuses to evolve. But more than that, he hasn't really grown as an artist and he kind of fails to execute his own work. He doesn't seem to really understand why artists use certain techniques so when he uses them, they aren't really successful. Like, okay, Doonesbury uses silhouette panels. Here's an example: Now, the black and white, characters darked out when the Doctor goes, "Interesting" while doing a check up? That evokes the feeling of anxious panic and worry the patient would be feeling - or, in short, it fits the emotional beat of the panel. It works because it's used to enhance the art.

Here's another one that maybe doesn't work quite as well. But again, it kind of uses the contrast to highlight the emotional beat of a creationist having to acknowledge the evolution of a disease he's been diagnosed with. Yes, the strip overall is kind of hamfisted about the general point, but the silhouette panel isn't done randomly, it accents the emotional crux of the strip.

Cole is still just laying groundwork, making his case, and going on to Lucille. If there is an emotional punch in the strip it's probably panel #3, though an argument could be made for panel #4. Panel #2 is still basically setup. Hell, you could cut it out of the strip and you wouldn't really lose anything. So the silhouette panel doesn't seem to have any reason other than "I don't have to do full linework or color for this one." Also, let's pretend not to notice that panel 4 is narrower than the rest of the panels in a clumsy attempt to hide that it's a cut and paste of panel 3, with a different hand shopped on. You can even see a bit of the line for her paenl 3 left arm on her right sleeve in panel 4.

And that's another thing: his work is lazy. It's static talking heads like 80% of the time, with a lot of obvious cut and paste work.

Dude, cartooning is your full time job. Put a little fucking effort into it.
Click to expand...
Today's Doonesbury is relevant. 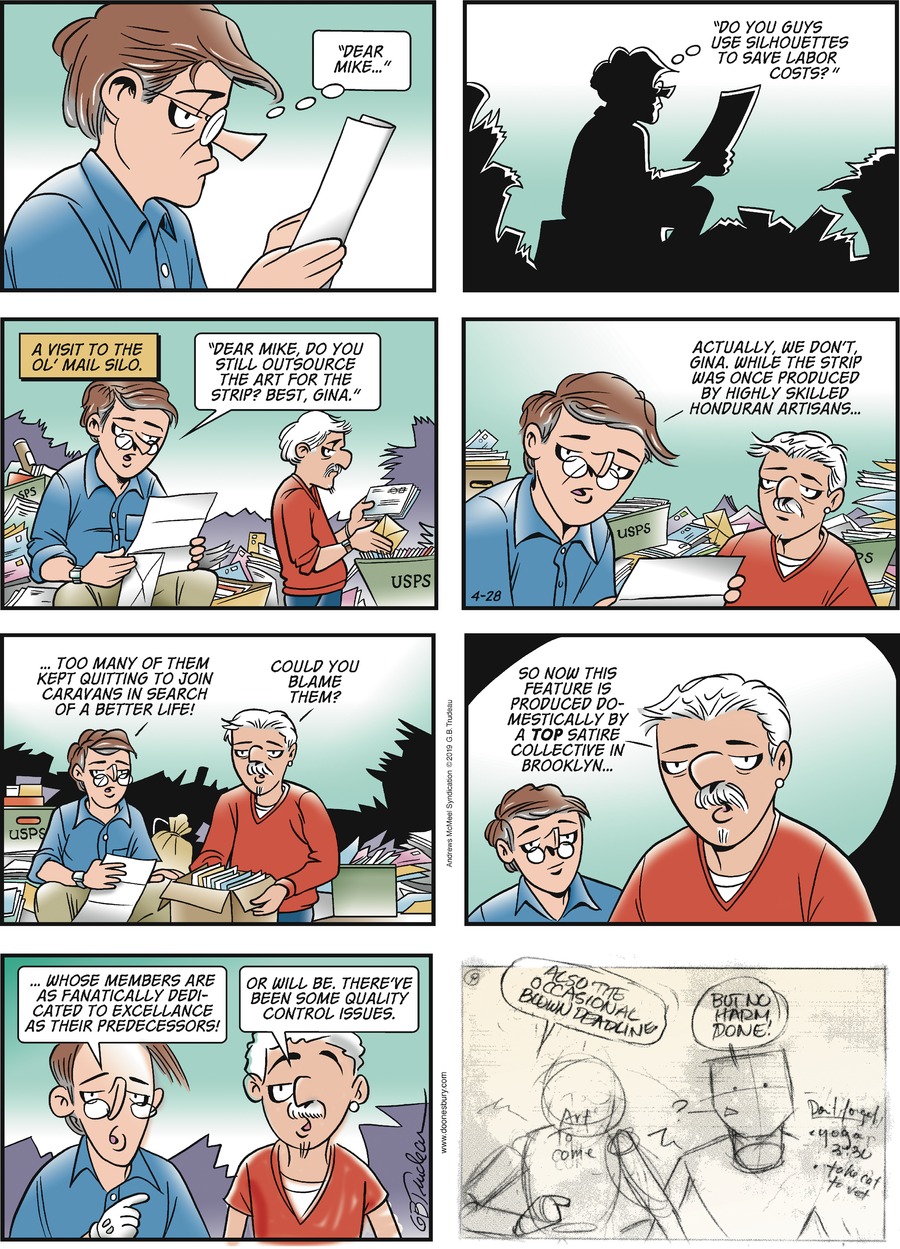 Staff member
#6,120
Reactions
3,357 628 7
Yesterday's comic explains why Skull is helping Scott's dad; it's because Scott's dad views Skull as being a lot like Scott (and not for being gassy and stupid).

#6,121
Reactions
2,877 827 25
I'm expecting this to end with it being a treatise on how Scott views Skull as a Scott avatar (stinky and stupid) v. how Scott's dad views Skull (warm-hearted and caring).

...anyone else ever notice how SCOTT and SKULL are so graphologically similar? S[Hard C][vowel][double consonant]? There are times I think it's a little too much of a coincidence to be entirely accidental.

#6,125
Reactions
266 107 0
My Mom's getting to that age where you have to repeat everything two or three times. And you have to keep her out of direct sunlight and always make sure there's a bottle of water on hand. Old people are like gremlins. They come with instructions.