#6,058
Reactions
2,899 829 25
Weirdly, PvP has actually been good for the last few comics. Sylvanas and Overwatch references that weren't bad, it's almost like a return to its roots.
I don't know if the trend will continue, but I'll enjoy it while it lasts.

#6,059
Reactions
929 369 14
PatrThom said:
Weirdly, PvP has actually been good for the last few comics. Sylvanas and Overwatch references that weren't bad, it's almost like a return to its roots.
I don't know if the trend will continue, but I'll enjoy it while it lasts.

--Patrick
Click to expand...
I dunno. On one hand, the jokes are alright. On the other hand, I can easily read it as "A cheap Trump joke, gaslighting other comics still making video game jokes 20 years after he did it, and a weirdly-specific LOTR reference that doesn't actually really work with the characters as established (She's a LOTR nerd too). Oh, and middle-panel-silhouettes, because why not.

#6,060
Reactions
425 55 1
I know it isn't Magic, but is anyone looking at the new game by Richard Garfield, Key Forge? It's a unique deck (I shit you not) game. Every deck is unique and will have it's own unique name/card group. 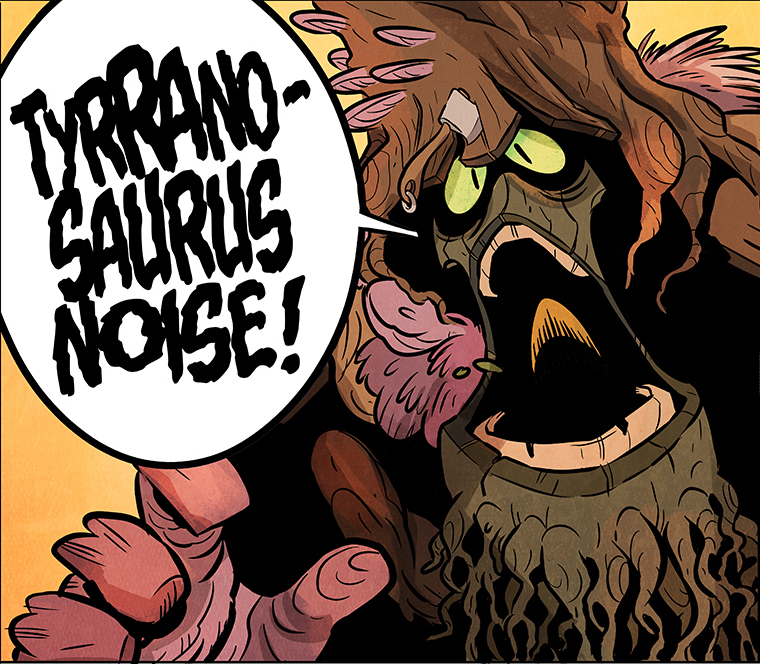 Click to expand...
Well, the PvP staff are not really all pure of heart...

Click to expand...
The heart is purely full of hate.

#6,068
Reactions
1,461 537 7
Kurtz has an interview on a D&D youtube channel I like and 6 minutes in he's already bitched about so much, including how fake he finds Critical Role. What an unpleasant man.

--Patrick
Click to expand...
Don't let Scott's public meltdowns distract you from the fact that it was Kris who actually pulled the trigger that killed off the old forums.

#6,073
Reactions
91 46 0
Frank said:
I don't blame Kris for it. I can only imagine how little he wanted anything to do with it.
Click to expand...
Literally one of the last things I remember happening in the old forum was Kris having to lock a thread where Shegokigo was claiming to have killed a person. Can't really blame him at all for washing his hands of it.

Staff member
#6,074
Reactions
2,640 1,232 23
I can certainly tell you in the early heady days of Hal-whateverwewerethen, I certainly understood where he was coming from.

But Steve Kuntz is still a hack.

#6,075
Reactions
630 100 7
AshburnerX said:
Scott really is just someone who is completely bitter over his lack of widespread success, despite the ONLY reason he's had ANY success being that he made friends with people much more successful than himself. He has no one but himself to blame for the bridges he's burnt. He has no one but himself to blame for his failures.
Click to expand...
His lack of widespread success is due largely to his poor work ethic. His strips are frequently late or missing altogether, his humor is getting kind of dated and increasingly niche, he falls back on too many unfunny running gags / recurring characters, he more or less refuses to evolve. But more than that, he hasn't really grown as an artist and he kind of fails to execute his own work. He doesn't seem to really understand why artists use certain techniques so when he uses them, they aren't really successful. Like, okay, Doonesbury uses silhouette panels. Here's an example: Now, the black and white, characters darked out when the Doctor goes, "Interesting" while doing a check up? That evokes the feeling of anxious panic and worry the patient would be feeling - or, in short, it fits the emotional beat of the panel. It works because it's used to enhance the art.

Here's another one that maybe doesn't work quite as well. But again, it kind of uses the contrast to highlight the emotional beat of a creationist having to acknowledge the evolution of a disease he's been diagnosed with. Yes, the strip overall is kind of hamfisted about the general point, but the silhouette panel isn't done randomly, it accents the emotional crux of the strip.

Cole is still just laying groundwork, making his case, and going on to Lucille. If there is an emotional punch in the strip it's probably panel #3, though an argument could be made for panel #4. Panel #2 is still basically setup. Hell, you could cut it out of the strip and you wouldn't really lose anything. So the silhouette panel doesn't seem to have any reason other than "I don't have to do full linework or color for this one." Also, let's pretend not to notice that panel 4 is narrower than the rest of the panels in a clumsy attempt to hide that it's a cut and paste of panel 3, with a different hand shopped on. You can even see a bit of the line for her paenl 3 left arm on her right sleeve in panel 4.

And that's another thing: his work is lazy. It's static talking heads like 80% of the time, with a lot of obvious cut and paste work.

Dude, cartooning is your full time job. Put a little fucking effort into it. 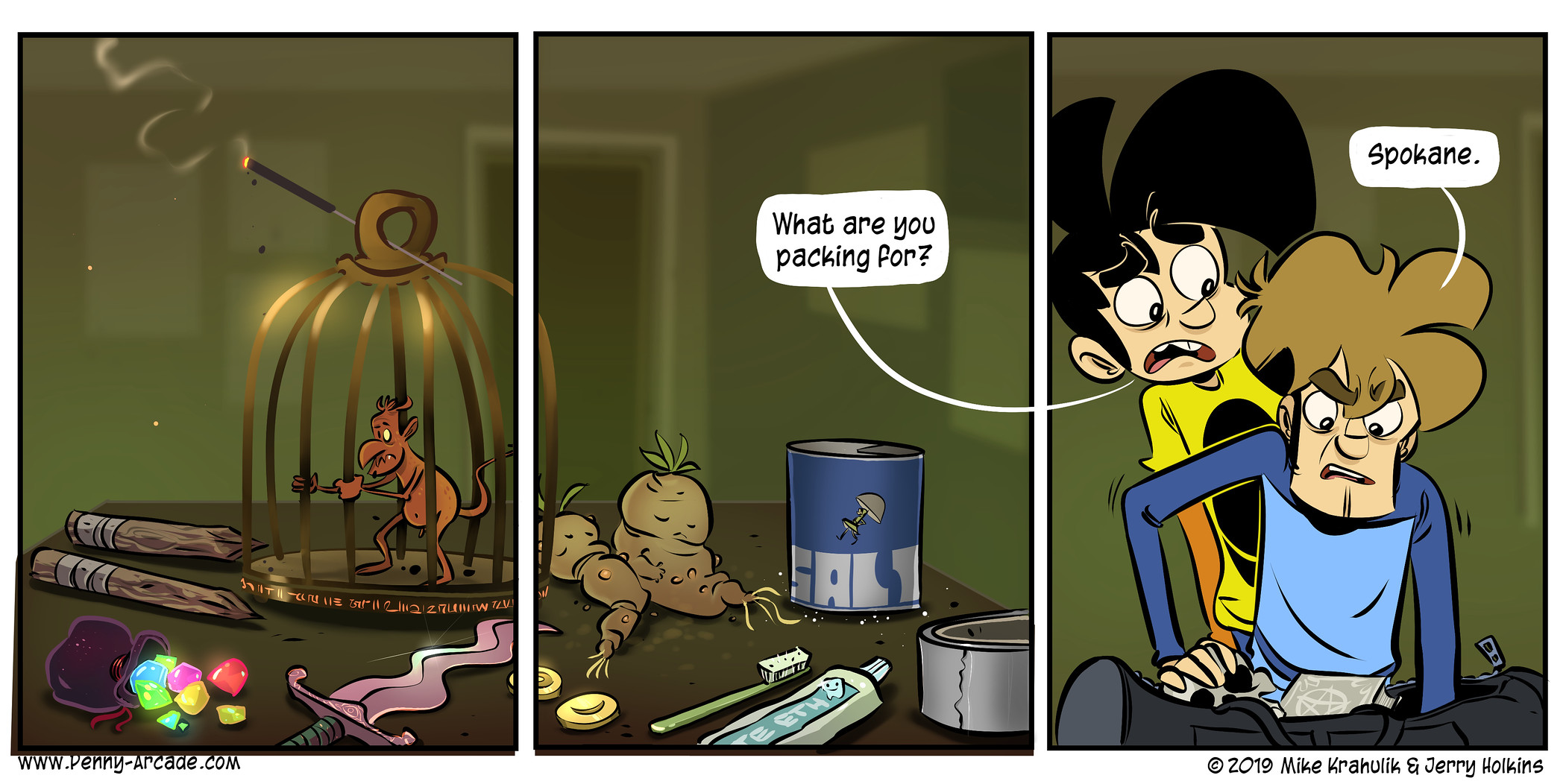 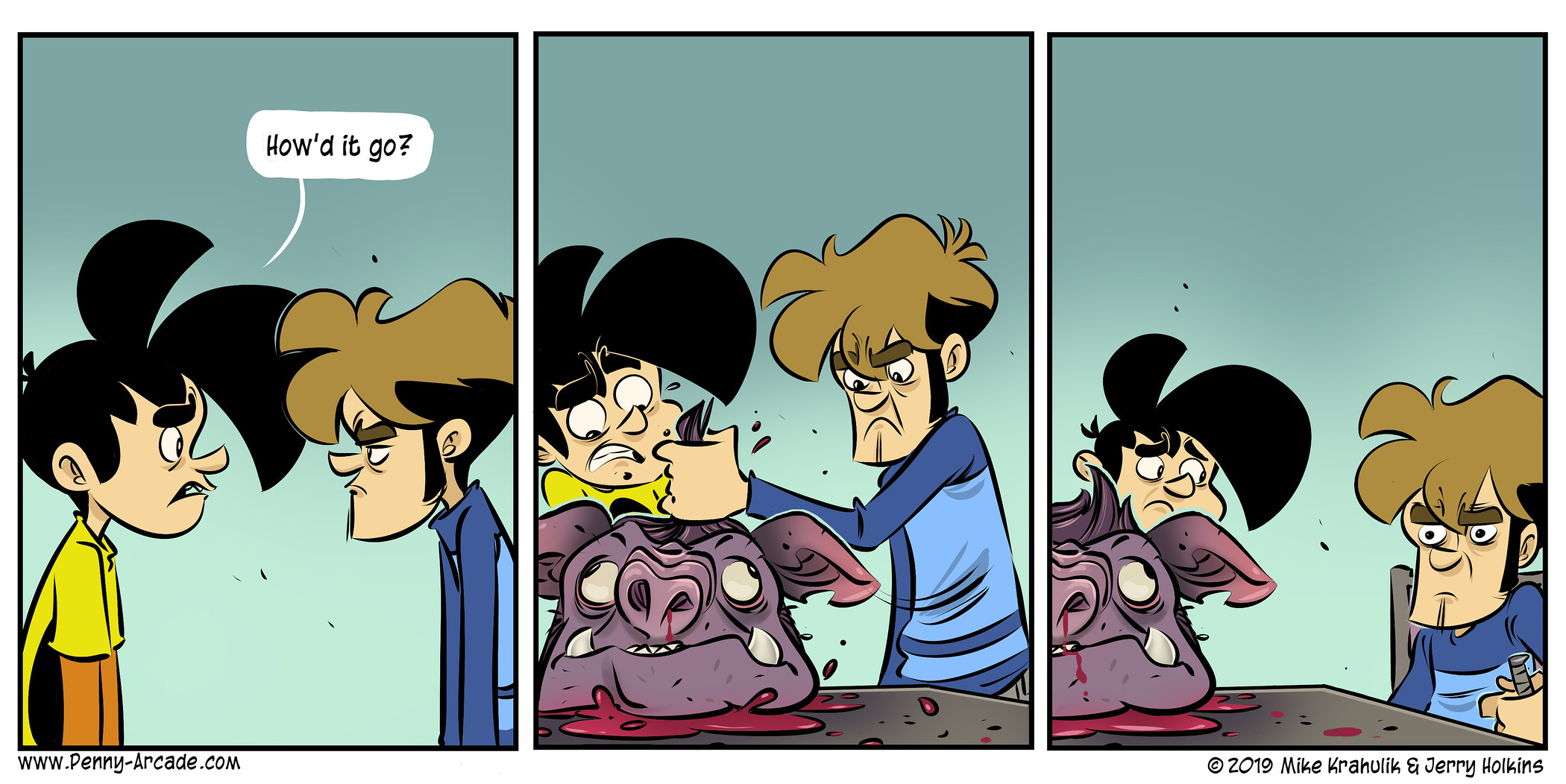 Click to expand...
People bitch about Mike's current art style, but god how I laughed at Tycho's face in that last panel.

#6,081
Reactions
1,312 430 11
GasBandit said:
According to the news posts accompanying those comics, he was visiting family.
Click to expand...
I read those after the fact and didn't watch the video. No need to watch more Kurtz being Kurtz.

Click to expand...
So did I. Was just adding I didn't watch the interview video.

#6,084
Reactions
630 100 7
I'm not a huge fan of Mike's current style - I really liked his late 2000s style - but he is constantly trying new things, new perspectives, evolving as an artist. And the results are frequently stunning.

#6,085
Reactions
630 100 7
And looking at today's PVP... well, you can't, because the current one is from last Friday. And it's just a bunch of C&P panels. What gets me is that with all the lighting and angles being so flat, the staticness of the comic really jumps out, and Kurtz doesn't even really hide where he's altered the copypasta'd image that well. There's no depth! I don't read LICD all that often, but what Lar does with lighting and shadow really makes the artwork jump to a higher level. It gives a sense of motion and life to images where it's still basically just people standing there and talking. But they also move and react. Now, compare LICD from April 13th.

Now, it's a pretty basic strip. No dialogue, and very simple action. But it's executed so damn well. The shadow and light indicate that the illumination is coming from the upper right, and it's consistent in each frame. Nancy's expression, though simple, is easily interpreted, and every move changes how her hair sits, how the light falls on her, and her position relative to her background. Panel one: head level, eyebrows and side-eye indicate she's looking surreptitiously around the office. Panel two: posture's a little higher, head's titled so her hair shifts with the weight, she's doing a more obvious looking around, making sure the coast is clear. Panel three, standing, head tilted up, hair shifts back a bit, you can sense the weight as she pushes off her desk to get up and walk. Panel four, the payoff: relaxed expression, "I'm just doing my own thing in mah boxers and slippers in the office, do do do".

imagine how Scott would have drawn Jade doing the same thing.

#6,087
Reactions
969 73 2
I don't for the life of my understand why Scott is even involved in any of the Wizards of the Coast stuff? What is Wizards getting out of this?

#6,088
Reactions
1,461 537 7
Dei said:
I know that Kuntz is also the reason Wil Wheaton stopped doing Acquisitions Inc too. :/
Click to expand...
He bitches a bit about Wil Wheaton too during the interview.

#6,090
Reactions
773 179 4
Celt Z said:
WESLEY CRUSHER IS A NATIONAL TREASURE! YOU SHUT YOUR WHORE MOUTH, KURTZ!
Click to expand...
He can’t, it’s the only way to keep his head from exploding from all the bs he has in his head.
You must log in or register to reply here.
Share: Reddit Pinterest Tumblr WhatsApp Email Link
Top