We have a "random crap" thread for tech, but nothing specifically for "news" stuff.
Well, now we do.

Since the subject has been a hot one here lately, gonna start off with this, Techspot's Ultimate Guide to Buying a Used* Graphics Card.

They rank all the cards worth having (and many that aren't) and give you a breakdown of availability and fps per dollar. Worth a read even if you're not in the market for a new card, as it's also an indication of what cards have had good staying power.

The data below is arranged by the average frame rate, with the GeForce GTX 1080 Ti offering the fastest performance so it's shown at the top of the chart. Next to the GPU model name we have the average selling price in December [...] For models that come with various VRAM capacities, such as the RX 570, pay attention to that and if the 8GB models in this example are only slightly more than the 4GB cards then consider investing a little more to get the extra memory. At this point we recommend avoiding cards with only 2GB of VRAM.
Click to expand...

Agreed on the VRAM. I actually think the 6GB limit on the newly-announced RTX 2060 cards is going to come back and bite them in the butt in the future**, so however you narrow your choice, if it comes down to two similarly-priced and similarly-performing models, get whichever one has the most VRAM, with preference give to those cards which have 8GB or more.

--Patrick
*The data also apply to cards bought new, of course. Not every used card is "used," per se.
**I foresee some point in the future where the RTX2060 6GB cards get bottlenecked while previous-generation GTX1070 8GB cards are still viable JUST due to that extra 2GB.

Probably want to avoid those 1070ti cards on ebay for hundreds of dollars off from sellers who just joined today.

If you're curious about how different choices in CPU/GPU/RAM might perform, here's a very informative YouTube channel.
As an example:

I don't know if I'm more impressed with the variety of hardware tested or by the clean presentation, uncomplicated by narration/opinion/promotion. It's just facts-in-your-face, draw-your-own-conclusion-type stuff, and I really appreciate that.

--Patrick
*but none of the games tested exhaust the 2GB smaller VRAM of the 2060 (though Far Cry 5 comes close). I still want to know how it handles running out of VRAM.

Staff member
Google has proposed changes to the chromium engine that would make ad blockers like uBlock Origin and uMatrix no longer work on Chrome. 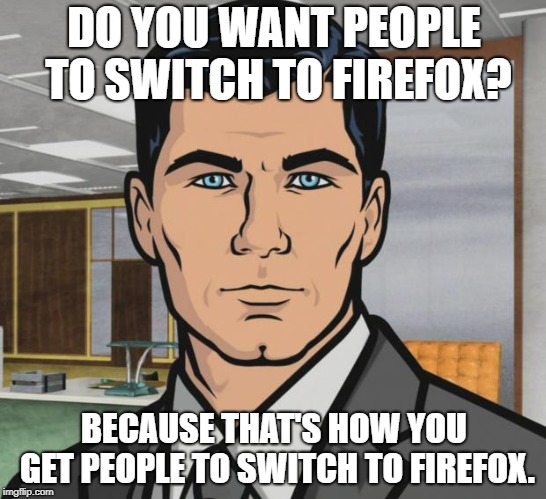 Internet has been pretty hot about that today. I’m interested to see how Opera reacts (since they also use the Blink engine found in Chrome(-ium) but are not Google).

PatrThom said:
Internet has been pretty hot about that today. I’m interested to see how Opera reacts (since they also use the Blink engine found in Chrome(-ium) but are not Google).

I've been hearing a lot of rumbling about a browser called "Brave."

GasBandit said:
I've been hearing a lot of rumbling about a browser called "Brave."
Click to expand...

The rumbling I heard wasn't good at all.

Oh, yeah. Brave is that browser that replaces ads with their own. I can see why some might get up in arms about that.

GasBandit said:
Google has proposed changes to the chromium engine that would make ad blockers like uBlock Origin and uMatrix no longer work on Chrome.

For anyone looking for an awesome new build, Intel has just released the 28-core Xeon W-3175X, which they bill as the most powerful CPU available for the consumer market, capable of supporting up to 768GB RAM spread across 6 channels.

That said, the performance is impressive (and it had better be for that asking price!).

So yes, for about $7000 you can get yourself the biggest, baddest system that Intel has to offer.
...but I'm thinking the real lesson here is that yes, AMD has succeeded in making Intel nervous.

--Patrick
*Updated price now that the ASUS boards are in the retail channel.
Last edited: Feb 3, 2019

Staff member
Remember when 2 factor authentication was the magic bullet?

Now if only SMS/3G/etc would get strengthened to match.
I've already had to deal with a mom whose son popped out her SIM while she wasn't looking and put it in his phone. This let him snowball ownership of damn near EVERYTHING she had claim to before she realized what was going on.

PatrThom said:
Now if only SMS/3G/etc would get strengthened to match.
I've already had to deal with a mom whose son popped out her SIM while she wasn't looking and put it in his phone. This let him snowball ownership of damn near EVERYTHING she had claim to before she realized what was going on.

What a shitstain of a son...

Ravenpoe said:
What a shitstain of a son...
Click to expand...

She kept her phone in a case, and she was only there because "my son must've somehow messed up my login." He had coincidentally just run off with his girlfriend a day or two ago. It wasn't until she took it out of the case that I noticed the SIM door was damaged. I put two and two together and realized what that probably meant and so started her on a tour of her other online stuff, looking for tampering and with her getting more upset as we kept discovering new things (Facebook, credit cards, etc). We sat together for a while and with some patience (and a few phone calls) managed to undo quite a bit of his shenanigans. I made sure to set her on the path to reclaiming control over the rest of her assets, and she left shaken but most appreciative after the emotional roller coaster. I'm just glad she fated up with me as opposed to Motivated Sales Guy at Generic Wireless someplace, cuz at least I have some idea what to do when this kind of stuff happens.

White-hatting that kid off all her accounts and stuff made my whole day.

Reviews are coming in for the Radeon VII.

tl;dr: Its gaming performance across several games is roughly equivalent to NVIDIA's GTX1080ti or GTX2070, it delivers render/compute performance 20-30% higher than the Vega 64 for about 25% less average power, and it has twice the memory bandwidth (1GB/s!) of any other card on the market today (as well as twice the VRAM of most gaming cards). That said, it runs just about as hot as a Vega 64, and it'll still cost ~US$700 to get one. On the plus side, AMD is selling them directly at MSRP, so retail prices should be more stable, though since the almost always higher-performing RTX 2080 sells for almost that same price, it's probably not going to be the NVIDIA slayer AMD was hoping for...unless it turns out the VII absolutely smokes NVIDIA's cards in Adobe Premiere or something. The few early creative tests I've seen show the VII meeting or beating the RTX2080, but as I said above, if you can afford a VII, then you can afford a 2080, and unless your rig is used exclusively for editing/rendering, the 2080 is probably the more versatile choice unless you NEED the full 16GB the VII has to offer (8K editing, maybe?).

Now comes the wait to see if they extract any additional performance via future driver tweaks, or how much headroom there is for overclocking the card for speed or undervolting it to further cut power draw/heat while keeping performance. The Vega architecture itself has a LOT of room for performance, though pushing it that hard results in grossly impractical levels of heat and power draw.

Russia plans to completely disconnect from the internet to see what happens.

What happens is a whole lot of businesses go dead in the water because their mission critical software that depends on connecting to the internet is suddenly cut off. Certain hotel chains can't do *anything* if their internet is down. This won't end well.

Sure hope nobody in Russia needs to fly a plane more than 3-4 days after the disconnect.

Vox Media apparently doesn't know about the Streisand Effect. They're filing takedowns on those who went after them for that awful Verge "Build a PC" video. The community is striking back.

No kidding. A reshoot or even just taking it down would have been the better option.

PatrThom said:
No kidding. A reshoot or even just taking it down would have been the better option.

The Verge pulled the original video after all the abuse it got. This is just bullying now.

He mentions the Streisand Effect, and how Vox invoked it *themselves* when the Sunday Times filed a takedown on THEM.

Former insider trading lawyer. They forced him out on leave last Summer and then fired him in the Fall after an independent investigation.
More details here.

As someone who used to be in the field, securities fraud is no joke. There is so much paper trail these days, if it even smells like you're acting on inside information, you're going to have the SEC up your butt soooo fast.

Turns out they were... less than truthful about the performance hit. Apparently they had their own blocker in the works that (of course) wouldn't have been affected by the changes.

Staff member
If it performs the same as a GTX 980 Ti, why not just buy that?

Reviews are out. If you are looking for a new graphics card, and you don’t ALREADY have at least a GTX 1070 or higher/newer OR an AMD Vega/VII card, then the only reason NOT to get the GTX 1660 Ti is because you plan to get an RTX 20x0/Radeon VII instead, or else because you found a spectacular deal on a (probably used) 1070ti, 1080, or 1080ti.

The only people who really need need to sit down and think carefully before buying one fall into one of two three groups:

GTX 1060 owners - the performance of the 1660 Ti is better than the 3yr-old 1060 in every way, your dilemma is solely about whether a ~40% performance improvement is worth spending ~$300 on a new card IF you’re just months away from contemplating a complete new build anyway.
Computational/Scientific users - research your workload, because there are cheaper cards that absolutely crush the 1660 at some tasks, and there are more expensive cards that crush it at others by enough of a margin that the extra price would be worth it.
EDIT: People who want to take advantage of raytracing - The raytracing hardware is only available on the RTX line of cards, so you will have to get at least an RTX 2060 to do raytracing.

Hey I posted that knowing that my ~$200 RX 580 was delivered to my house just 3hrs prior.
But like I said elsewhere, I got that for reasons beyond stuff like just trying to increase my gaming FPS.