Staff member
Some people have reported that HVs and SVs randomly lose their ability to dock to bases. Workaround is to either remove and reattach the docking pad/landing gear, or leave the area and come back after a few minutes.

PatrThom said:
Indeed.
I don't know the purported benefits of the Unity upgrade, but nowhere to go but up, right?

Ha! This is Eleon we're talking about here. Just yesterday I noticed that - on multiple ships - the left side doesn't work. Weapons don't deploy, textures don't light up, thrusters don't do anything, landing feet that are supposed to go up and down just stay up... of course, relogging fixed it. Now the right side of ships doesn't work instead.

Well, single sided ship usability seems to have cleared up - which is good, because whenever things weren't working, it was because they were no longer registering as existing. You could point a multitool at them and it wouldn't register that there was anything in front of it. Now though... definitely got that HVs and SVs won't dock bug. Leaving the area and coming back didn't help, either. I went to a different system and came back two hours later and the HV hadn't miraculously docked itself, and the SV I was in wouldn't dock when I got back.

I would imagine so - they were all prefabs.

Staff member
Turns out they had to revert back to the previous Unity build.

Yeah, I saw. Back to flatter grey textures on my grow plots and -5fps.

Staff member
XPA's banned. Contrary to what some people might think, they weren't all bad eggs, but a couple rotten ones made the whole thing too much trouble to deal with.
T

The Watcher in the Wings

Funny thing about words on a screen, the only meaning they have is that which you assign them.

The Watcher in the Wings

If you're that threatened by opinions that differ from your own then ok?

I didn't realize you cared so much

The Watcher in the Wings said:
If you're that threatened by opinions that differ from your own then ok?

I didn't realize you cared so much

You're just more trouble than you're worth. Circumventing bans is always grounds for escalation. Haven't you figured out this community does not want you, yet?

GasBandit said:
a couple rotten ones made the whole thing too much trouble to deal with.
Click to expand...

I do wish those couple had been more willing to defer (discretion/valor and all that), because the rest actually made for good conversation.

PatrThom said:
I do wish those couple had been more willing to defer (discretion/valor and all that), because the rest actually made for good conversation.

I wish I could say something like "if they want to boot those two we can talk about the others coming back," but I think at this point, a clean break is probably the best thing, particularly since it could really be argued I've made an unjust decision in banning 8 players for the crimes of 2. I somehow don't think any halforumites are going to take me to task over this, however.

Well, it looks like the reversion back to 2017 has fixed at least one thing - I no longer have trouble docking SVs and HVs to anything - but broken about a half-dozen others. The game is loading two copies of the playfield - one for me and one for Aislynn. Sometimes we get stuck on her version of the ground and have to wait for my version of the ground to become the dominant one, and then fall several dozen feet (or get launched into the air and fall from 300m). Structural Integrity of PoIs is rotten again, I've had some wreckage PoIs where only one piece was touching the ground, and the rest exploded when I got close. And my favorite - alien insects are once again spawning inside my base. At least this time it's only the little passive ones, back on Gas' server pre 8.5 wipe I had a base on a lava planet that had those damn butt-bugs spawning inside it.

Edit: Oh, and bases are back to/still definitely draining all of their fuel and ignoring their solar batteries when no one is logged into the playfield - even though the base didn't process anything last night once both of us logged out, it still used up all of our fuel and the food rotted.
Last edited: Nov 6, 2018

Staff member
Server's been surprisingly active the last week or so, through no fault of my own. A couple large factions have moved in, MBR and RaT. They're still getting established, but things could be getting interesting again.

GasBandit said:
Server's been surprisingly active the last week or so, through no fault of my own. A couple large factions have moved in, MBR and RaT. They're still getting established, but things could be getting interesting again.
Click to expand...

I noticed we have ATA, MBR, are we going to get FAT, GPT, and IDE now?

Staff member
The Weenie Cheese Sandwich was disabled in 1v1 combat for the first time ever, tonight.

Get a load of the stupid look on my dumb face when it happened:


I had the guy dead to rights and the battle hadn't even been going for 9 minutes yet. He was chewed to pieces and down to his last turret. But it was a missile turret. And he got a lagshot that went through ALL SEVEN LAYERS of my gapped armor and kicked off a chain reaction that decored and crippled the cheese. 2 hour RTT time.

Staff member
and here's the fight from his perspective

I wondered what kept you up late enough to vote, but I hadn't expected THIS.

Staff member
The devs posted this teaser for Alpha 9. 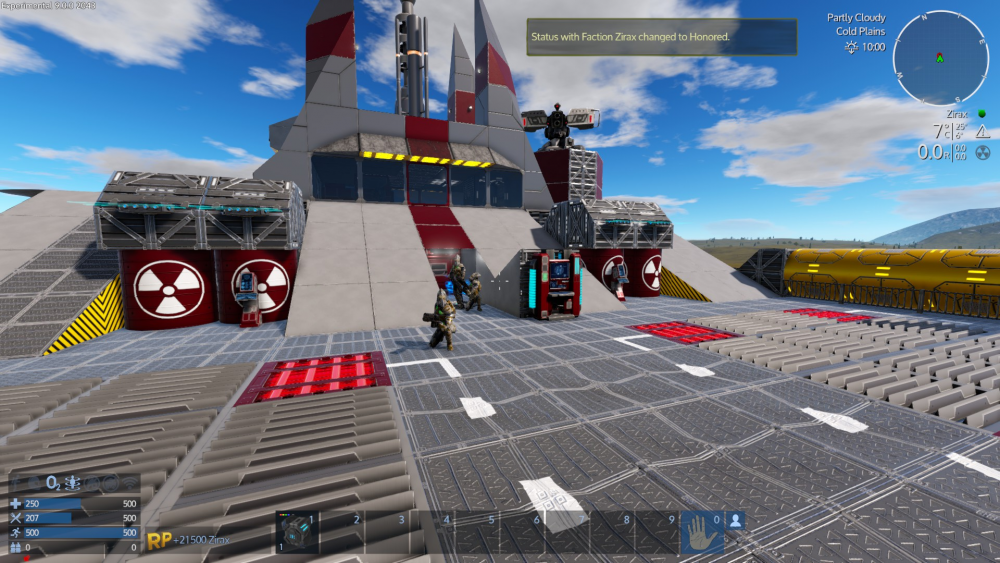 The obvious pickup is that they're apparently making it so you can earn regard with NPC factions. Or maybe just the Zirax. Or maybe they're adding more factions (currently all the hostile aliens, despite having different names like Ghost Riders, Zirax, etc, all go off the same faction).

GasBandit said:
The devs posted this teaser for Alpha 9.

“You must be logged in to do that.”
Empyrion’s forum does not allow hotlinking.

PatrThom said:
“You must be logged in to do that.”
Empyrion’s forum does not allow hotlinking.

Ah. Rehosted. It showed up for me, but then, I'm logged in to the empyriononline.com forum.

And I know I could log in as well, but it looks like I’m going to be stuck on mobile until tomorrow sooo...yeah.

Also I can’t tell what that is in slot 1, either. A spacefarin’ RolyKit, maybe?

Staff member
Another thing that has been announced is a modular cargo system. It apparently lets you build an extensible series of cargo blocks that amalgamate themselves into one giant inventory. They intend to have search/sort later, but it won't be available at first pass.

Hmm. The inventory bar has a little bust/silhouette badge at the far right, too. So we can tell the difference between when the bar is being used for personal inventory v. ship weapons, maybe? Also, whatever that unknown object is, it's something that can be placed on all BA/CV/SV/HV structures going by the color badges.

Staff member
Hold on to your butts - pretty much all your ship designs are gonna be worthless in Alpha 9, especially any miners/haulers/cargo transports - cargo volume and mass is all but confirmed to be implemented in A9.

RIP nimble miner, and the CVs that carry you to the surface.

GasBandit said:
RIP nimble miner, and the CVs that carry you to the surface.
Click to expand...

They already killed the Nimble Miner with the increased power requirement.
I can't see them mucking with the actual mining TOO much, just due to gameplay. If they make a stack of ore weigh the same as the entire miner or something, you're basically going to be trading an equal weight of promethium for whatever ore you're after.
I'm not terribly looking forward to redesigning my Audax Miner, that's for sure. At least I wasn't wrong when I decided to center the harvest box.

PatrThom said:
They already killed the Nimble Miner with the increased power requirement.

Nah, there was plenty of places to tack on one more generator (and even a few more thrusters) and still have it fit within the same silhouette. I remember when they made this change in Space Engineers, though. I know what it's going to do.

You read the rest, though, right?
(I edited to add a bunch of stuff)

Staff member
Yeah I did. The rest of my post was meant to address that.

Anyway, Alpha 9 has now gone to the experimental branch:

...this is going to require a server restart, isn't it.

PatrThom said:
...this is going to require a server restart, isn't it.

Well, when alpha 9 hits stable, yes, I'm going to have to regenerate an entirely new map from scratch. They're changing all the rules about creature spawning, changing up some POIs, etc... no way around it.

That's what I figured.
Let's see what they do to fridges-as-storage. I mean, they still have the old-style on/off switches.