PatrThom said:
Not sure which one you're referring to.

Well, this was me to the other guy in that conversation after I got muted...

Don't get it confused, I'm still voting Biden, because the alternative is... *gestures at everything*

But it's still ok to be upset that our broken system has given us this shit. It's that same broken ass system that gave us Trump to start with.

As stated in another thread, WV held its primary yesterday. State Senate President Mitch Carmichael lost in the GOP primary.

After all the crap he pulled trying to renege on deals during the WV teachers strike a couple years back, this is sweet, sweet justice.

Couldn't tihnk of where else to put it:

If you have not been following the JK Rowling saga this week, hoooo boy.

Dei said:
If you have not been following the JK Rowling saga this week, hoooo boy.
Click to expand...

She's really doubling down on the whole terf thing

Dei said:
If you have not been following the JK Rowling saga this week, hoooo boy.
Click to expand...

It does warm my heart to see many Potter-related actors and actresses speak out, though. None so far have defended her that I've seen. They've all come out in support of trans rights.

I think we're on at least triple at this point.

The way I see it? Someday, she'll be dead and I doubt her estate is going to be as tight fisted with her works as Tolkien's was with his. We'll see what happens then.

In other news... African American family in Spokane harrassed by 7-8 car loads of armed Right Wing Extremists, before escaping. They were then followed by said cars to a camp site, where the family was trapped when said group blocked their exit by felling trees. All because people keep spreading fake rumors that ANTIFA is going to invade their shitburg little towns.
Last edited: Jun 10, 2020

Hey @DarkAudit - I has a new hashtag!

My mom's US representative is Louie Gomert. One of the worst people in Congress. But his office fixed my mother's Social Security mix up in a day. SSI basically said that my mom's $100 retirement check from Teachers' Retirement negated my late Dad's SSI benefits. She was losing thousands of dollars a month due to their screw up. I think they are going to give her the money for the last year of underpayment. 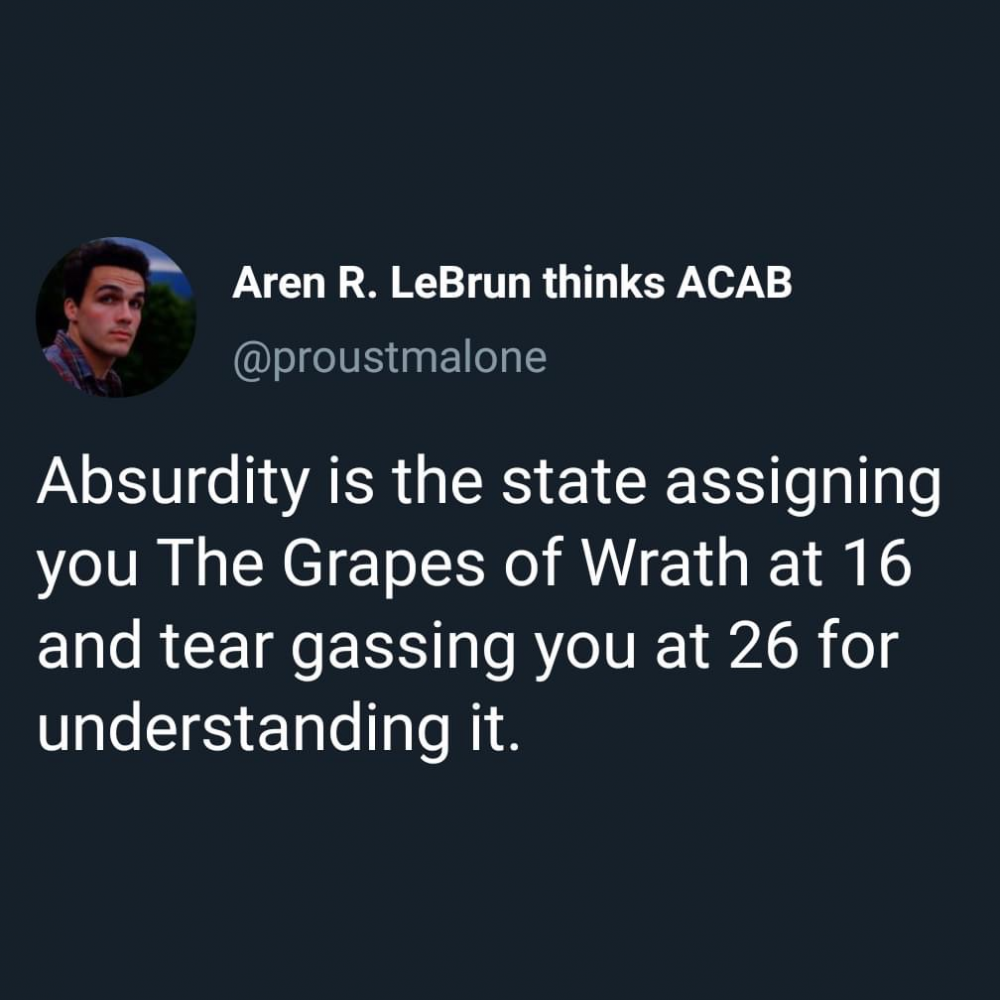 I don't know exactly where this goes, but I figure at least a couple of people on here understand why this was posted on the group's FB website:

It is the Birthplace of the GOP. I still don't know what is happening next door.

The "Little White School House" is, indeed, where the Republican Party was "born" back in 1854. There is a slightly larger home behind it, the Lyman House - which, for the longest time, was known as The Republican House Restaurant. My grandmother had her wedding reception dinner there. AFAIK it is no longer open as a restaurant or reception hall.

There is a BMO Harris bank with a drive-thru just to the south of the property, with a suitably large parking lot that is connected to another parking lot for the local Catholic church - which is where my Uncle Ralph's funeral was held.

I have mixed feelings about the place. There is history behind the house - a little school house built for the small town of Ripon, yes, but where a bunch of community and state officials met in protest (ironically) over the Kansas-Nebraska Act. They chose to splinter away from the Democrats, Whigs, and Free Soil parties to form the Republican Party.

@Dave can tell you more about the wonderful results of the Kansas-Nebraska Act, but to these people, it was the last straw. The question of slavery would be determined at the state level - oh, the irony of state's rights being the reason why the GOP began in the first place! - which meant that any state could be a slave state if enough people came into the state and forced the legislature to allow slavery "wanted" it to be one. Basically revoking the Missouri compromise and setting the nation toward Civil War.

I would be willing to bet that someone - which side, I don't know - wants to use the place as a rallying cry for protest.

Your politicians are so fucking embarrassing.

Ron Perlman has spent the last day or so lighting them on fire and their tepid responses and doubling down is so fucking sad.

This is rare these days, so enjoy some unambiguously great news.

Gorsuch has been really surprising me. He so far has voted with the more liberal side of the bench twice now.
I am glad he seems like someone that isn't influenced by the pet issues of his conservative colleagues and actually seems to have a strong moral compass and focus on the law, he was even the one to put in the final argument in the case in favor of maintaining full protections.

Yeah Gorsuch sucks, but he isn't a complete stooge the way Kavanaugh is.

Okay put in your estimates now. How long until Trump has a Twitter rant disowning Gorsuch and calling him some really weak insult like "Borsch Gorsuch" while saying he was a secret plant of the Deep State, calling for him to step down.

I don't think trump will touch this one. It's a case that shows where he doesn't actually have complete control over something and would rather people forget about it.

This is the one trump will throw a tantrum about.

I dunno, I'm going to guess he'll say they need READ Trumpist Judges instead of these phony weak-ass regular Republicans, and they need more Kavanaughs and less....you know, competent people with their own opinion.

That said, I was reading up on it a bit and man, the way Precedent Is Everything in American law is just so completely alien to me. The Anglo-American legal system is fundamentally, deeply different from the European Continental one. It really just works differently all the way down.

Anyway, the danger is of drawing that reasoning further. "We just read what it says, not what we want it to mean in a modern context" would pretty much mean "the right to bear arms" means everyone can walk down Fifth Avenue with a nuke.

On the less hopeful side, more so if you are an environmentalist, SCOTUS upheld a permit to put a gas pipeline through the Appalachian Trail. Even Ginsburg voted in favor of overturning the lower courts block on the project.

So I read the majority decision written by Gorsuch and it's pretty interesting.

Of course it leaves open exceptions like rest rooms and locker rooms that don't really fall under discrimination since they are entirely based on sex.

ScytheRexx said:
So I read the majority decision written by Gorsuch and it's pretty interesting.

I always wondered why that wasn't the main argument used against the "gay men are free to marry women just like straight men" trope.

ScytheRexx said:
Okay put in your estimates now. How long until Trump has a Twitter rant
Click to expand...

Nah, Trump doesn't actually care about the issue one way or the other, so it's unlikely to say anything.

And teh stooges in his admin that do are more likely to complain about it anonymously on Stormfront then twitter.

Frank said:
Gorsuck is my guess.
Click to expand... 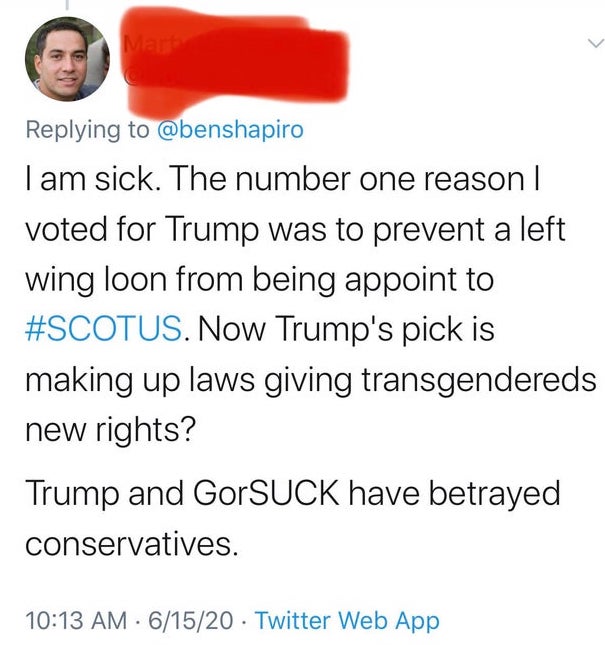 Yeah, he clearly has nothing against Transgendeblues right...

Staff member
Reading it will piss you off at first, but read it all the way to the end.

For what its worth, the district issued an apology for their LGBT discrimination in general and specifically to him.