a Trump vs Clinton United States Presidential Election in 2016

Dei said:
I don't feel for Ted Cruz. Regardless of the primary, he chose to endorse Trump at the end to try to save his career even though he knew better.
Click to expand...

Apparently his big donors said that he had to endorse Trump or they'd never give him money again. I don't feel for him because he's a piece of trash, but that is tough pressure.

Dei said:
I don't feel for Ted Cruz. Regardless of the primary, he chose to endorse Trump at the end to try to save his career even though he knew better.
Click to expand...

Oh I agree, Ted Cruz just sucks so bad and has proven to be such a toady sycophant I get those pangs of guilt you get when someone picks on the mentally disabled seeing him just fuck up over and over.

Dave said:
Oh no, that's so not true. Now the republicans are starting to come out of the woodwork. You know what their justification is? That women bought 50 Shades of Grey. So, you know, they must want it, right?

OMG, I shouldn't have gone looking for that...

Wow, it's finally time. It actually happened. Ahem. Give me a second to prep my fingers, crack my knuckles. Okay, here we go, I'm ready ...

Dei said:
My aunt posted that. My grandmother is posting about Bill Clinton.
Click to expand...

Man, what is the deal with older relatives and right-wing nuttiness? The chain emails of the '90s, the rants on Free Republic, and the crazy Facebook posts of today all seem to come from one's aunt, uncle, or grandparent.

And they're never from your mellow uncle who used to be a hippie. They're from your bitter uncle who still refuses to talk to his ex-hippie brother.

I get my Trump opinions from Brian Blessed!

The fact that Trump supporters can't tell the difference between consensual BDSM/kink and sexual assault is...not surprising.
Click to expand...


To be fair, I'm not sure the author of 50 Shades is all that certain, either.

Ravenpoe said:
To be fair, I'm not sure the author of 50 Shades is all that certain, either.
Click to expand...

Ravenpoe said:
To be fair, I'm not sure the author of 50 Shades is all that certain, either.
Click to expand...

Guys this is gonna be a fucking train wreck.

Staff member
wow, this is...not good for him.

The John McCain of early 2000 (before the SC primary) would have punched 2008 McCain in the face for choosing a whackadoodle like Sarah Palin. But to the alt-right, she was akin to a goddess. And the more traction she got, the deeper and deeper the GOP got into that hole.
Click to expand...

Hey! You're not doing the thing. Like not at all. This is the opposite of the thing.


Are you feeling ill?

Staff member
And you add in the unfortunate influence of the "moral" majority and you have...Trump. It's a shit-show, indeed.

Staff member
He can't be allowed to win. He will start a war and send many people to their deaths. He is so god damned dangerous.[DOUBLEPOST=1476066580,1476066376][/DOUBLEPOST]Also, guess what other politicians start their terms by throwing their competition in jail?

Necronic said:
Also, guess what other politicians start their terms by throwing their competition in jail?
Click to expand...

Who is Trump's mentor and comrade?

Well, I guess he did better than last time, but thats about the biggest compliment I can give him.

Staff member
Trump had nothing to lose, so he went low and dirty against Clinton, bringing up Bill's past, promising to prosecute her, etc...

It's pathetic. It also sounds like the blowhard was saying far worse stuff on unaired Apprentice footage. More profane, sexist shit. Oh, and the n-word. The producers are afraid to leak it because the Mark Burnett contract has a $5 million leak penalty. That would all make sense given that NBC just locked that footage down hard. 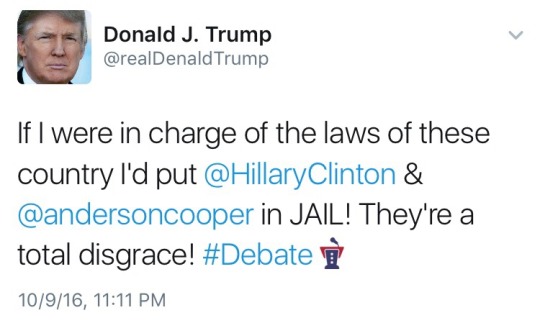 To be fair, a lot of people have noticed that whenever AC wears a tight black t-shirt, a country gets hit by a natural disaster (or is drawn into a bloody civil war). He clearly must either be imprisoned, or be forced to remain naked indefinitely.

Staff member
Thats not an actual tweet is it?

Apparently not, but it'd be hilarious to me if someone else had taken @realDonaldTrump first, so Trump was forced to create a knock-off version.

Pence has announced he's staying on. Too bad. Would've been funny to see.

blotsfan said:
Pence has announced he's staying on. Too bad. Would've been funny to see.
Click to expand...

He'll do a "soft acknowledgment" of the results. Like what he did with the birth certificate and whether or not Obama founded ISIS.

If violence isn't the answer, you're asking the wrong question.