Staff member
I KNEW I recognized this seiyuu (voice actor).

You thought he was President Shirogane's father, BUT IT WAS ME, DIO!!

the trailer for the Kumo desu ga, Nani ka? anime makes it look like a shitty mobile game. So much lazy CG.


Also the character design has gone completely to shit.

Couldn't even make it half way through the first episode. The animation is sloppy, the voice acting is awkward and poorly cast, the premise is trite and the dialog is painful to listen to.

Basically it's about a girl-hating anime nerd incel who meets a girl that changes his life and makes him think maybe girls aren't so bad after all. A textbook MPDG story in anime form. It just got a second season so I thought it might be worth watching, but nope. I can see why it was so poorly rated on MAL.

How does this get a second season, when so many other good shows don't get picked up again...

Staff member
Looking at you, Shieldbro. You too, One Punch Man. 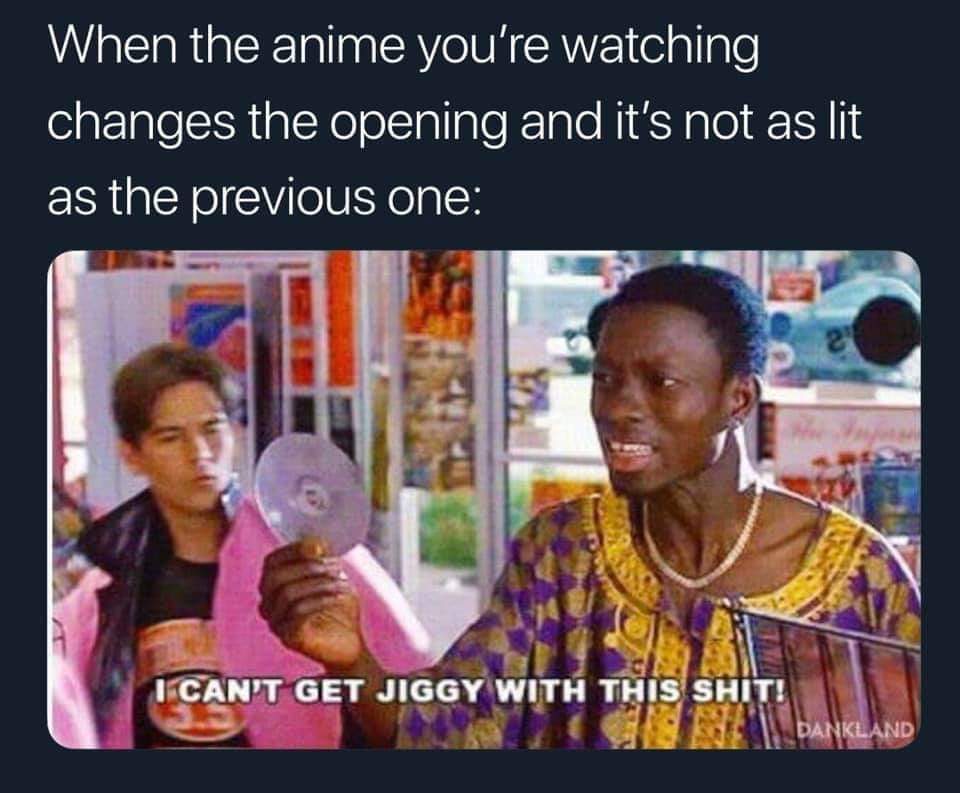 This one made me mad, til I got to the end.

Staff member
Nichijou, one of the more prevalently memed anime titles, is finally getting an english dub that hits 7/23.

Staff member
One Punch Man Season 2, Episode 2 has me feeling better about the new season than the previous episode did.

Jury's still out on Isekai Quartet.

Yeah, I WANT to like this, but it's too slapdash, and they've got too many characters with too much going on for a 10 minute show. And the premise is absolutely taking the longest, yellowest piss ever.

Staff member
Oh hey, Code Geass: Lelouche of the Resurrection is coming to american theaters too, with a dub!

Staff member
Well, apparently that IS still Jonny Yong Bosch, I guess he must have just gone through puberty or something over the last 10 years, heh.

Staff member
Oh look, anime memes about a series OTHER than shield hero are starting to hit imgur's front page. Well, let's see what this is about... (typing in search) The Helpful Fox Senko-san....

"Nakano is an employee of an exploitative "black" company, who meets a divine fox spirit named Senko. While she looks like a young girl, Senko is in fact 800 years old..."

Let me know when we get to the one with a tanuki.

PatrThom said:
Let me know when we get to the one with a tanuki.

Staff member
The 100 rules of Anime.

Staff member
Damn, I was just coming here to post that

man so much cool shit this spring!

I'm glad Attack on Titan is back so I have something to watch on Sundays that doesn't leave me disappointed.

On the topic of classic anime.

I'm hoping that they announce season 2 Kaguya after the live action comes out, but that said, I'm still reading the manga because it's great. 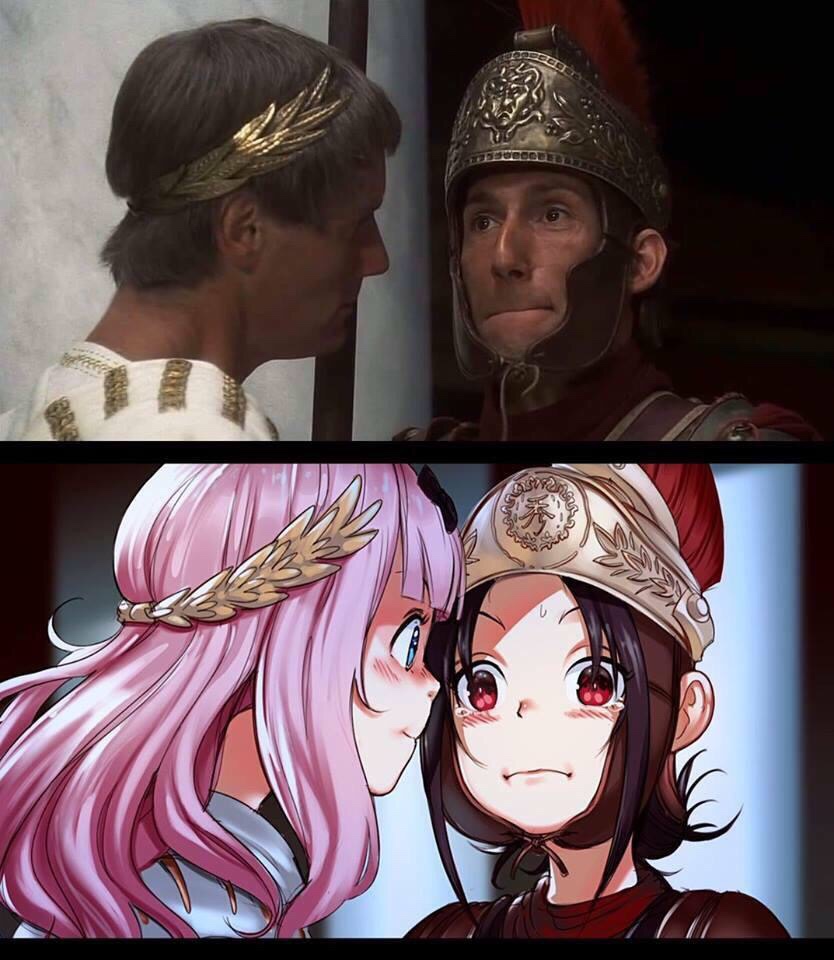 Staff member
Land of the Lustrous

Genre: Action, Drama
Fanservice: None really to speak of aside from some brief snail-boob gainax bouncy bouncy.
Premise: In post-human earth, humanoid beings called Gems defend themselves against the onslaught of humanoid entities called Lunarians who try to shatter and collect them to use as decorations.

Alright, let's just get this out of the way right off the bat: I've not really watched any Steven Universe, but everybody says some variant of "this is just Steven Universe for weebs." It's about a few dozen ungendered-but-female-presenting gem-based people doing stuff and fighting bad guys, and some of them have crushes on each other. I don't know if that's enough to validate the comparison, but I think that's where it stops.

The story follows one particularly hapless, hopeless, useless, scatterbrained gem named (and apparently composed of) Phosphophyllite. Phos is too weak and fragile to fight the invading Lunarians who break and kidnap gems, and as such has lived mostly an aimless and idle life while everyone else fights or works. To be honest, for the first half of the 12-episode season, she's pretty intolerable.

The show is like an avalanche, slow to start, but steadily gaining in momentum and energy. By the second half, Phos' character arc is starting to get interesting and disconcerting questions about the nature of the Lunarians and their connection to "Sensei" (the leader and mentor of the Gems who seems to be nearly omnipotent). Unfortunately, just as we're really getting to where those questions might be answered, the season ends. It aired originally in 2017, and the english version came out on blu ray just this past January, so maybe we'll see a second season in the next year or two.

Overall, I'd say it's an OK watch. Not a must-see, but all I've really been interested in otherwise this season has been One Punch Man season 2, Shield Hero, Jojo, and Isekai Quartet. That leaves a lot of time to watch other stuff. The show is almost entirely CGI, and the quality varies from moment to moment (sometimes with single digit model frame updates, ugh) but they crank it up for the fight scenes, so I guess that's ok.

The Saga of Tanya the Evil 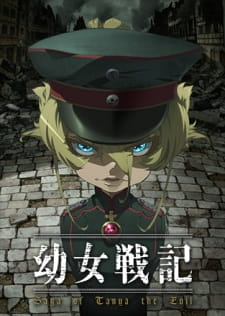 Genre: Isekai, War, Drama, Action
Fanservice: 25 seconds of aryan male beefcake beach episode
Premise: A pragmatic athiest salaryman from Japan is reincarnated into a little girl in an alternate earth's WW1 so that he/she might be forced to find faith in God through adversity - but instead, Tanya resolves to prove that she can take the world by the throat in open defiance of the "being" that would call itself "God."

I got into watching this because it was the fourth property included in Isekai Quartet, and the only one I hadn't seen previously.

As stated in the premise line above, the story basically goes thusly - a cutthroat japanese salaryman is pushed in front of an oncoming train by someone he callously fired. In the moment of his death, God manifests in his presence and laments the increasing faithlessness of the modern world. The salaryman mocks and rebuffs God, refusing to acknowledge him as such, and instead labelling him as "Being X." Being X observes that the man's refusal to acknowledge any higher power might have been because he had never experienced helplessness or true difficulty in life, and so thus to teach him humility and faith, Being X reincarnates the man into a baby girl 100 years in the past in an alternate Earth, just as World War 1 is about to break out.

This Earth is much the same as our own, except that the names of the countries are all slightly changed (mostly as a half-hearted nod to avoiding controversy, I assume) and magic exists alongside the same level of technological development, and has been accepted as normal and common. There are even "mage" units in the military, the same as one might classify infantry, armor, cavalry, artillery, or support.

"Tanya" is born in the "Empire," the parallel version of Germany. The Empire becomes embroiled in a 2-front war with the "Republic" (France) and the "Entente Alliance" (an amalgamation of the Nordic nations, but most prominently representing Finland). Tanya still retains all her memories from living in modern Japan, and observes that any citizens with magical talent (of which she is a prodigy, of course) are drafted into the military sooner or later, so she joins up before that can happen - at the young age of 9 years old. What follows is a war drama that wanders between being interesting and uncomfortable. And most of it serves merely as backdrop for Tanya's personal spiritual war with "Being X."

Japan's typically tone-deaf attitudes toward the politics of WW2, which naturally might be rooted in being on the "wrong side" of that conflict, show through clearly in this series. Furthermore, it only takes a few episodes before the anachronisms (that could be waved away by it being a parallel world) heap up, and the "WW1" settings starts becoming rife with WWII imagery, technology, and metaphors.

And the metaphors in the series definitely get quite anvilicious. Mage units in this world can fly, if they channel their magic power through a sort of "magi-tek" flying device. This device takes on various different forms in the various different nations. The mages of Finland fly using magic-powered skis. In France, they mount horse-shaped devices. The English have steampunk magitek Nimbus 2000s. And naturally, what is the German magic flying device? I shit you not: A thick, blunt, not-at-all-subtle iron boot. This sort of imagery and metaphor absolutely inundates the entire series. It almost seems to be visibly avoiding saying "Nazi" while at the same time having the Germans swim, fly, and quack like Nazis - but told from a viewpoint of them being the world's protagonists.

I'm a little disappointed that the supporting characters aren't developed as much as they could be. Most of the series focuses squarely on Tanya and her internal monologue, and apart from one or two other characters, nobody else really gets much development despite a lot of time clearly being put into their design. In fact, this series has some really gorgeous work put into it - not only in the distinct character design, but some really lovingly crafted and detailed background artwork and scenery. It makes excellent use of light and tone to set the mood without going too over the top. While the animation is often middling at best, the artwork for stills stands out as being exceptional.

That bumps my assessment of this title up a half point to around 3/5. I'd say anime enthusiasts looking for something new to watch would find this acceptable, but it's hardly must-see. In fact, given the lack of character development all around, it's not even required viewing to enjoy Isekai Quartet - you're not going to miss out on any inside info or jokes in the latter series, because this one doesn't flesh any out for it to make of use.
You must log in or register to reply here.
Share:
Reddit Pinterest Tumblr WhatsApp Email Link
Top