The Random Crap Thread 2: It Hits the Fan.

figmentPez said:
No matter which angle you look at, rectangles are always right. Triangles, tho? At best they're right only a third of the time.
Click to expand...

So you agree that triangles are the one and only right angle?

HCGLNS said:
So you agree that triangles are the one and only right angle?
Click to expand...

I thought I had an inside scoop, but then it pulled a 180.

I am very popular on discord, and have many friends

You're never alone with spiders for friends!
B 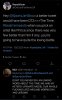 Well, maybe he hasn't heard about this sexy new dance...

If any of you have Bell in Canada, their loyalty department is feeling pretty generous. I just got a free year of Crave and a monthly discount.

Have you been reading my DuckTales fanfics?

That's not the title I'd give 'em, just sayin'.

PatrThom said:
That's not the title I'd give 'em, just sayin'.

Gotta keep it pg on this side of the forum.

As a former scout, I believe this in a second. Women were by far our best spies in World War 2.

It's extremely fitting that my evil arch nemesis in this world is the caulking gun.

Staff member
It suddenly occurred to me how strange it is that the Three Musketeers are more known for swordplay than they are for the guns they get their name from.

figmentPez said:
It suddenly occurred to me how strange it is that the Three Musketeers are more known for swordplay than they are for the guns they get their name from.
Click to expand...

Generally speaking, in film adaptions, ONE of them will be the guy with a pistol who shots guys from across the room before pulling his sword and he'll usually use something fancy like a duck's foot if he gets outnumbered. But otherwise? Yes, because sword fights are more exciting.

Seeing a bunch of people shoot a single bullet, miss and than reload only to miss again is not as exciting as a swordfight with snappy oneliners.

When I was in secondary school, one of my hot female classmates came to school one day basically just wearing a sports bra as her top.

Every now and then she'll just randomly pop into my head.

When someone screams about even the lightest without ANY context spoilers, I could literally beat them to death.
This is something that people take to such extremes.
If you are like this, you're trash. Thank you.

Frank said:
When someone screams about even the lightest without ANY context spoilers, I could literally beat them to death.
This is something that people take to such extremes.
If you are like this, you're trash. Thank you.
Click to expand...

Non-like reactions don't work on mobile so pretend I marked this post "I need this explained to me." I don't get this.

blotsfan said:
Non-like reactions don't work on mobile so pretend I marked this post "I need this explained to me." I don't get this.
Click to expand...

They can sometimes work if you hold a little extra time on the reaction button. The timing takes some practice, though.

On iPhone it’s working well on mobile. I rarely view this site on something other than my phone.

blotsfan said:
Non-like reactions don't work on mobile so pretend I marked this post "I need this explained to me." I don't get this.
Click to expand...

People who flip out at even the most minor of spoilers make me ill. Especially in a group setting or where a couple of people are discussing something and you're within earshot. It's the most egocentric, self-centered bullshit in the world and I fucking hate it. It should not be indulged.

Oh yeah, intentionally spoiling for someone is dickish, but people are gonna talk about stuff. It's why for all the new Star Wars movies I go on the first showing opening night. I can't control what people around me talk about.

One of our kids is a spoiler. Accidents happen and I don’t expect people to not discuss stuff that’s been out for a while, but deliberately ruining something for someone is rude and I wouldn’t be happy.

Talking about something hyped and new without regards for spoilers in an open setting is impolite. I don't expect to see someone discussing Dumbledore's death in the Random Crap thread two days after the book releases.
Deliberately spoiling things people have or may have been looking forward to is an incredible dick move - going around shouting SNAPE KILLS DUMBLEDORE at the people waiting in line to buy the book justifies you losing all your hair and muscle tone before your 30th.
There's a huge difference between a big spoiler that may really change the interpretation, the pacing, the reading of the source, and minor stuff. "Jabba the Hutt isn't even humanoid! He's, like, a huge slug!" is technically a spoiler, but won't impact your enjoyment of the movie at all, and people shouldn't get mad about it.

On the other hand, demanding people avoid spoilers for older media is also incredibly self-centered and asinine. I'm sorry, by now, "Snape kills Dumbledore" isn't a spoiler anymore - or if it is, at most in the sense that "Santa isn't real" is a spoiler - avoid saying it around kids. Yeah, I get spoiled too - I still haven't seen season 8 of Game of Thrones, but I have a pretty good idea of what happens. Where the line is? I dunno. A few months, a few years,... It's flexible and depends on the type of medium, and the societal impact of the thing in question.

Spoilers in general can be a minefield, and both sides can be idiots. try not to lessen other people's enjoyment of their media of choice, simple.

Sorry, I meant Satan. Santa, of course, is real and he'll be visiting you shortly!

I mean, he plays Among Us with us most weekends.
B

GasBandit said:
I mean, he plays Among Us with us most weekends.
Click to expand...

My feeling on spoilers is:
If I haven't seen something when it was new, then it's on me. I can't expect the world to cater to my schedule. People see stuff, they get excited, and they wanna talk about it. If I don't want to get spoiled, I try to avoid spoiler threads---but you can't ignore news headlines, passing conversation, and the like. And I don't care enough to try. If I was that into it, I'd have gone and seen it while it was new, like everyone else.
Show hidden low quality content
You must log in or register to reply here.
Share:
Reddit Pinterest Tumblr WhatsApp Email Link
Top