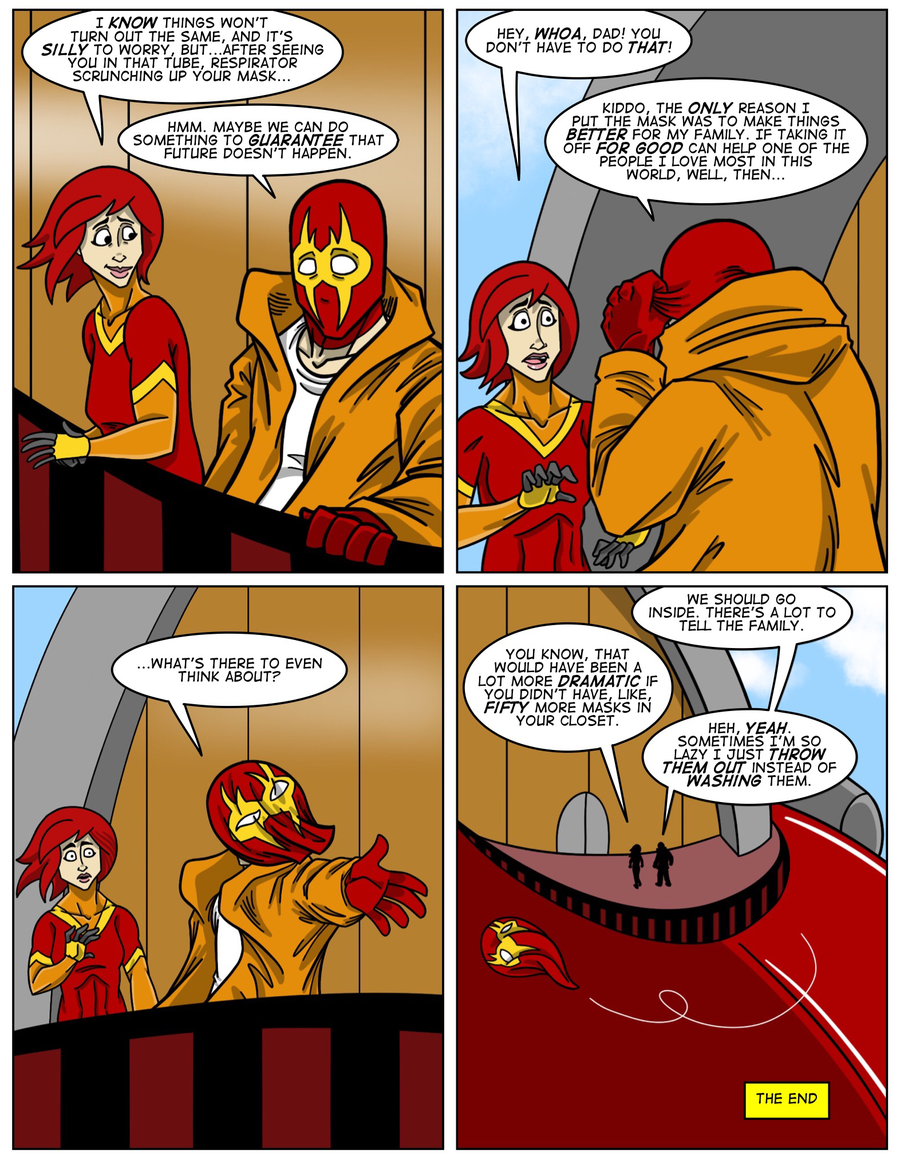 And that’s all, folks!

Edit: This was the farewell blog I posted on the main site -

And with that, we end the story of the Crimson Claw. I’ll admit I’m a bit misty-eyed right now.

When I started this comic over six years ago, I honestly never thought it would go this far, let alone to a proper ending. I’d left a string of abandoned webcomics behind me, but this one...This one was different. I was more charged up, more inspired, and more invested in creating this one than any other of my previous work. The Claws weren’t even supposed to be the main characters. I originally had designed the comic to feature The Actioneer, and the Crimson Claw was just a throwaway gag villain. After fleshing out the character and his world, I switch gears and put him front and center.

I set a twice-a-week update schedule, which I’d never even attempted before, and I actually kept it up, only missing a few scattered updates over the entire life of the comic. I actually went YEARS between missed updates, and I’m proud of that.

This comic got me through some tough times, too. But it wasn’t just the work. There were a lot of people in my corner early on. I had my friends at Halforums, where I mirrored the comic. Spiderforest accepted me when I only had the bare minimum fifteen comics in an archive. I want to offer a special thanks to KEZ, Tiana, and all the other SF members who helped me build and maintain this site over the years. I also had a wonderful fan base that was incredibly supportive, and I’m very thankful for all of you.

When I first started, I was doing a number of things that were brand new to me. I was creating my comic entirely on an iPad, and I think I might have really been one of the first creators to really do that. I also invited my readers to create characters and even guest write strips involving the faceless henchmen. Thanks to all those who were a part of those events!

I can probably guess you’ve got a few questions, so I’ll see if I can answer some of them right now.

Is this really the end?

For now, it’s the end. Anything’s possible, and I might get the itch to return to this comic, but for now, I feel this is a good ending - one that’s probably best left as is.

What about a spin-off?

I am working on a new project, and it’s still in development. However, it’s a new, original project, and won’t feature any of the Supervillainous cast.

When will we see that? Give us some details, man!

I’m still working on fleshing some things out, and, to be honest, I don’t even have a page sketched yet. Again, I’m trying some new things, but I’m more competent with the apps I’ve elected to use, so...it might not be a long wait. I’d like to have something established and up by Christmas. I just might take a short break first, since I really haven’t done that in six years. I think I’ve earned it. I still intend to go through Spiderforest, and I’ll need to make sure it’s good to ensure that happens. Also, you might want to join Halforums. Besides having a great group of people on the message boards, it’s also where I always work out my comic projects. You’d get exclusive sneak peeks and other art goodies. Even better, now I’ve got time to be chatty over there! Come and hang out!

The website comes down on Monday, unfortunately. Nah - I’m kidding! I’m going to leave things as is. I’d prefer not to risk breaking anything, and, to be honest, everything, even the author notices in between some pages, is partly the story of my own life. I don’t want to take them down.

So, for now, we part ways, but it’s hardly a goodbye. But I will take one last opportunity to say thank you for all the years we’ve enjoyed together with this comic. Thank you for being fans. Thank you for making creating this work so enjoyable and rewarding. And thank you - THANK YOU - for reading.

Until the next time!

Will Joey even recognize him without the mask?

#7
Reactions
929 369 14
Congratulations on a great, completed work! Looking forward to more from you

Also, to the All New, Chatty Zappit!

#8
Reactions
525 66 0
Bubble181 said:
Congratulations on a great, completed work! Looking forward to more from you

Also, to the All New, Chatty Zappit!

Click to expand...
That’s a Zappit who actually has time to talk.

I think I can be that Zappit now.

#11
Reactions
525 66 0
jwhouk said:
Just one question: why end on 624?
Click to expand...
It’s just when the story ended. I didn’t want to artificially drag it out and water the finale down.

#15
Reactions
525 66 0
There’s a problem with that, actually. The files I posted were basically set up for just web publishing. I never created print ready files.

I could go back and do that, but it’s a hell of a lot of work I would need to do over two different iPads.

Edit: I’m genuinely okay with that, though. I never really even gave any thought to a printed collection. I got a few questions towards the end, but I’m okay leaving it web-only for now. Spiderforest will keep it up indefinitely.