Well, I'd assume some people here will be following things around here.

So far, Belgium has already managed to get one silver medal! Huzzah! We've also seen some of our most likely medalists go out quickly, in skating, judo, taekwondo and tennis.

Well, Belgium has progressed to the Team finals (as fifth!) in gymnastics. For a country with the population of New York City, having one great gymnast is rare - managing the team finals is really an achievement! Nina Derwael is the favorite on the parallel bars (sorry Sunisa Lee :-P ), but more importantly, with Jutta we've got the (officially...) youngest athlete of the whole Olympics who also progressed to the allround finals. She won't achieve much there, but she really has some skills and the age to grow and learn. We have a gymnastics future again!

Oh, also, some other countries got some medals in other stuff, I dunno :-P

Apparently there was some basketball today as well, but I'm sure nobody paid any attention to that, right?

Is that even a real sport?

I've been watching random events whenever I can. I have completely lost track of medals.

Germany is at place 31 with two bronze medals.

Japan ist pretty strong. They are right now at 2. place. Today they got gold in skateboarding (men), Brasil silver and the US bronze.

Beijing's opening ceremony will probably never be topped. That was amazing.

Maybe. Didn't see it because it happened at like 6am.

You're in luck. We've advanced to the point where we can record live events and play them back later.

I thought it was because the networks lost the feed or some junk.

No further news yet whether or not she'll still participate in the individual finals the coming days.

They’re describing it as “a mental issue.”

blotsfan said:
They’re describing it as “a mental issue.”
Click to expand...

I've only seen "a medical issue" so far. Huh.

Mental issues can be medical as well. I applaud her for having the bravery to put her own well-being first, even when competing at the Olympics.

In the mean time she has put out a statement...
I'm absolutely in favor of accepting mental issues as a reason - it can be quite as devastating, if not as visible, as physical injury. I applauded Osaka for her withdrawal from Roland Garros a few months ago. But...the way Biles words it - a wound to her personal pride - made it come off to me more as a "I made a mistake which probably costs us the gold, so I don't want to continue" - which, well, doesn't seem the same to me. If you're a team player and you make a mistake, then you have to get yourself back together for the team. If Ronaldo decides he doesn't want to continue a match because they're 0-1 behind, that would not be considered him suffering from a mental problem, it'd be considered the shiny superstar who can't handle not winning.
I can't look inside Biles' head, and if she felt she couldn't continue, that's her decision. But her communication could definitely have been better to make it about the incredible amount of pressure she's under, rather than her pride being wounded at not performing as absolute number one.

She's got a lot of pressure on her and she's being scored more harshly than her opponents outside if she has a bad day in competition or not.

It seems like she genuinely felt that they had a better chance of winning if she dropped out, which I guess with how she performed, wasn't unreasonable.

Bubble181 said:
If Ronaldo decides he doesn't want to continue a match because they're 0-1 behind, that would not be considered him suffering from a mental problem, it'd be considered the shiny superstar who can't handle not winning.
Click to expand...

Yes, but what would it be like if the officials said, "If you have Ronaldo on your team, then your team's score starts at -1?" Ronaldo might decide to sit out just so that his team could start at 0 like normal instead of being, well, handicapped by having him. And that could definitely affect his mood.

I fully believe that there were at least some people actively employing the "shit on her until she quits" strategy.

A weightlifter from Taiwan won gold in the women's 59kg event.

Virtually all the media coverage in Taiwan has been about how she's much prettier and more feminine than most female weightlifters, instead of her athletic accomplishment.

bhamv3 said:
A weightlifter from Taiwan won gold in the women's 59kg event.

Virtually all the media coverage in Taiwan has been about how she's much prettier and more feminine than most female weightlifters, instead of her athletic accomplishment.

When bhamv is calling you out on it, you know it's a problem

Simone Biles withdraws from the All-around.

When things go wrong and you're 10 feet in the air, upside down, and sideways, you're in for a bad time. She made the right call.

A gymnast explains to us laymen exactly what she feels Simone is going through and it's fucking terrifying.

Here's what happens when you pressure someone into competing who isn't up to it. 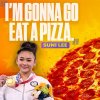 Am I the only one who get the feeling that this Olympic Games are particular filled with sexism towards the athletes?

chris said:
Am I the only one who get the feeling that this Olympic Games are particular filled with sexism towards the athletes?
Click to expand...

There's a lot of attention being paid to it, moreso than before, definitely.
Of course, some of it is real sexism, some of it isn't, some of it could be seen that way, etc.

For example, the outfits. It's all being thrown on one big pile and being dubbed as sexist and/or racist, but not each case is the same.
Beach volleyball? Yeah ,that's just ridiculous, those rules need to go.
Gymnastics? As long as the clothing doesn't interfere with proper judging, wear whatever you want - though there may have to be rules added for clear contrasts etc. I don't mind the German gymnasts wearing pants instead of leotards, because everything is still visible - in Basel last month, wearing black pants on a black background really did have a clear impact on the judges' capabilities to see every detail. And, to be clear, there are no rules to break: as long as it's body-fitting, any clothing is allowed.
Swimming? I can see why African swimmers would like to be allowed to use swimming caps that fit their "natural" hair (which, by the way, I think is a horrible term, even if I understand what they mean and where it comes from, but that's a matter for the Politics subforum, not Sports). But those regulations are there for a reason - while some styles of swimming cap for people with afro hair may even slow them down, others would give an unfair advantage because of their shape. You're not allowed to create a cone shape on your head, just like you're not allowed to wear gloves that can function as flippers.

The camera work has, in my opinion, improved when compared to Rio - but it's very much still an issue in some cases. There are plenty of shots of both male and female gymnasts sitting ,stretching, walking to and from their stations, whatever, but the men tend to be either filmed completely, or waist-up. The women still quite often get the cameras panning up their legs over their ass, shots from ass to shoulders, etc. The same holds true for the runners and vaulters and such. There's definitely been some improvement, but it's definitely still a thing. It's normal that in the course of some sports you'll occasionally see an ass or a chest. There's nothing wrong with that - not every time a (fe)male body is shown has to be (over-)sexualized or framed as such. But it's very often very much the camera work placing emphasis, or focusing on it beyond what's necessary or sensible.

chris said:
Am I the only one who get the feeling that this Olympic Games are particular filled with sexism towards the athletes?
Click to expand... 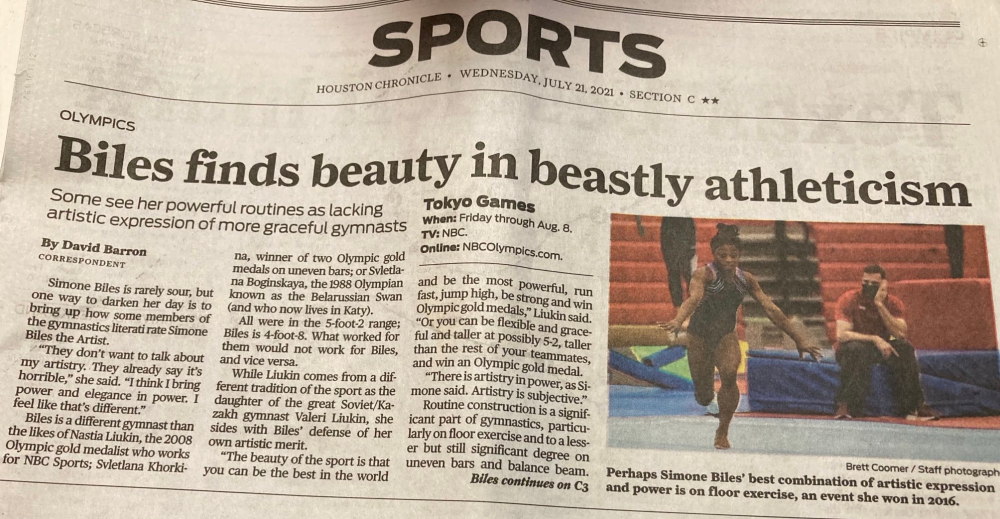 Finally get a US basketball game during waking hours and its not on TV so I can watch Italy vs Turkey in archery.

blotsfan said:
Finally get a US basketball game during waking hours and its not on TV so I can watch Italy vs Turkey in archery.
Click to expand...

try Peacock, the coverage should be free there. If you still have cable check the nbc sports channels.

Its not on any cable channel. I'm streaming it, but its still annoying that its not just on tv.
B

LIVE Men’s basketball is only available streaming on peacock with a paid subscription (or you know, other streaming means). Replays will be on NBC or NBC sports laster that night. NBC is the devil.

Even the bigger games? My god.

We get everything on the NBC Sports app, but it comes with our cable package. 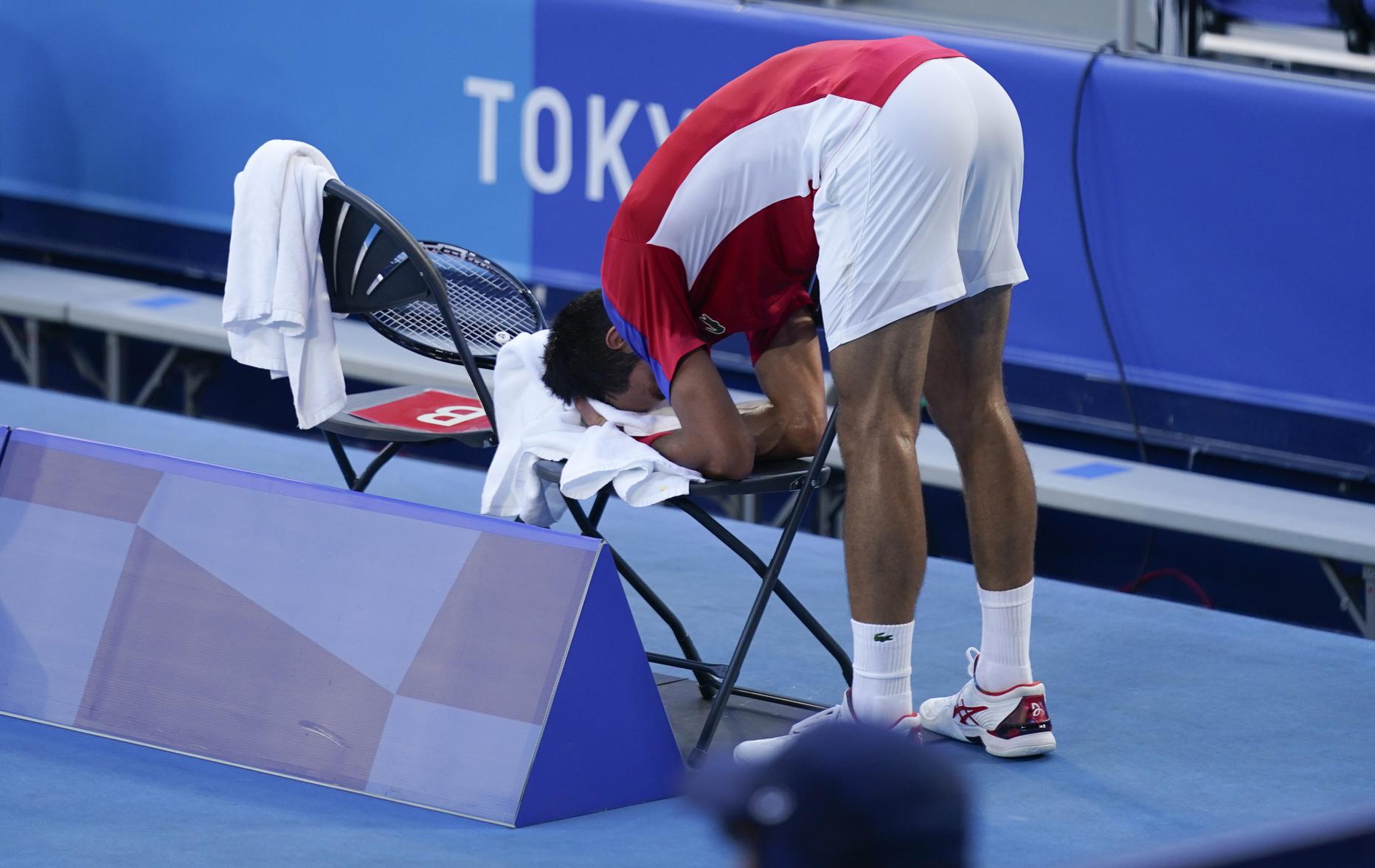 Novak Djokovic came off as lacking in empathy for Simone Biles. But after his disastrous...