To NAS or not to NAS, that is the question.

Right now I have 3 bays and they are configured as follows - C: drive is 1 TB system drive with 425 GB free (initially it was the only drive so it has a lot of crap on it I can move safely away), D: drive WAS my media drive and has 537 GB free, and A: is my now primary media drive with 1.07 TB free. Now I know that sounds like I have a lot of space, but I've archived a lot of stuff that I want to have access to, so I'll be filling this space back up.

The SSD is going to happen. That's pretty much a given. And since that's going to take away from my available bays, I'm thinking of getting a NAS. Which would be one hell of an investment and I'm not sure if it would be overkill. I would be using it primarily for storage since apparently you can't load Steam games on a NAS for some reason.

My choices as I see them are:
The benefit of the NAS would be setting up a RAID array and having a much better chance that I won't ever lose anything. The downside is pretty much just cost, which isn't much of a downside right now.

Thoughts and recommendations for a good NAS?

And I'm done spending large amounts of money. (By the way, I paid all bills and paid off 2 credit cards before making this purchase, so Gas can't yell at me.)

#4
Reactions
2,894 827 25
Once your data storage needs outgrow what a single 2-4GB external can hold, why then the answer is “of course you should NAS!” But you know, if you’re going to ask for advice, you might want to wait more than TWO HOURS for an answer before pulling the trigger. I mean, there are imgur albums that stay up longer than that!

Anyway, I haven’t even clicked on your link yet, but my recommendation would’ve been for one of these three models. They all support Plex, too.

#5
Reactions
504 140 7
PatrThom said:
my recommendation would’ve been for one of these three models.
Click to expand...
What are the benefits of qnap over synology?

#6
Reactions
2,894 827 25
stienman said:
What are the benefits of qnap over synology?
Click to expand...
I don’t know. I did plenty of research on the QNAP models before I decided to roll my own (a project which is still in progress, btw), but I did not look into the Synology. Mostly I was looking at QNAP because I found out I could get a discount through work. I don’t know if I get a discount on Synology, nor do I even know if the QNAP is still on plan, since once I found out I could roll my own for about half the cost, I decided to focus my efforts in that direction.

#7
Reactions
504 140 7
Ok. The last time I looked seriously at buying an existing system (which is years ago now) synology came out on top for my use case.

Haven't bitten that bullet though, despite really needing one.

Like you I'm now convinced I should roll my own, and in fact my son is willing to do it if I buy the parts.

Staff member
#8
Reactions
2,640 1,232 23
I thought about rolling my own as well, but wasn't sure if it would have been worth the effort. I can have this system set up by next week (or a few hours after it shows up). The hardest part for me is going to be moving the OS from the current C: drive to the SSD.

#9
Reactions
2,894 827 25
stienman said:
Like you I'm now convinced I should roll my own, and in fact my son is willing to do it if I buy the parts.
Click to expand...
The sole factors (besides cost) which made me decide to roll my own are:
-Unattended error detection and correction to combat bit rot (i.e., btrfs or ZFS support)
-Hardware-independent, standards-based disk format (in case of HW failure can transplant disks to new NAS) — because I NEVER want to hear, “Oh we don’t support that model any more, you’ll have to scavenge eBay for a working legacy model if you want a chance at getting your data back”

Dave said:
The hardest part for me is going to be moving the OS from the current C: drive to the SSD.
Click to expand...
Isn’t it always?

#10
Reactions
732 112 11
Dave said:
The hardest part for me is going to be moving the OS from the current C: drive to the SSD.
Click to expand...
There are programs that will mirror the install on the SSD super easily.

Staff member
#12
Reactions
7,770 1,662 33
Dave said:
(By the way, I paid all bills and paid off 2 credit cards before making this purchase, so Gas can't yell at me.)
Click to expand...
Yeah, when something breaks next week I'll quote this again

Staff member
#13
Reactions
2,640 1,232 23
This is the only real money we've spent so we have a good 4 digits left over sitting in savings doing nothing but being productive. I want to use it to pay down our last card (the one I used last year to go to Texas) but we're holding off in case of any emergency.

https://windowsreport.com/move-windows-10-ssd/
Click to expand...
This is what i used last time: https://www.macrium.com/reflectfree

Also, this thread is totally a Baader-Meinhof phenomenon for me, since it showed up right after i had to buy a NAS for work...

#15
Reactions
779 360 16
Macrium Reflect is what I used to flash my drive before upgrading to WinTen. I'd highly recommend it.

#18
Reactions
2,894 827 25
Dave said:
Did you guys buy it or use the free version? Seems that the free version won't back anything up.
Click to expand...
Some software is worth paying full price for, even if you only use it once.
...especially when your bank acct is > 4 digits.

#20
Reactions
1,175 229 0
Dave said:
Did you guys buy it or use the free version? Seems that the free version won't back anything up.
Click to expand...
I honestly don't remember

#21
Reactions
732 112 11
Dave said:
Did you guys buy it or use the free version? Seems that the free version won't back anything up.
Click to expand...
I don't buy this sort of stuff... but i can't guarantee i didn't use the full version...

Though now that i think about it, i used it to mirror a smaller SSD to a bigger one.

But why do you need a back-up if you're just mirroring the HDD on an SSD? Just keep the HDD un-wiped for a while as back-up.

#22
Reactions
423 230 1
Sounds like the issue I ran into while trying to mirror my drive over before I decided to do a fresh install of Windows on the SSD. If the drive you're copying from is larger than the drive you're copying to, even if you only want to mirror a portion of the origination drive, you have to have the full version of most of these utilities, or they'll just look at the overall sizes and say "nope!"

#24
Reactions
2,894 827 25
Dave said:
First thing I'm going to do is move all media stuff to the NAS. Everything that is on the C: drive is being moved out. The only thing left on the C: drive is going to be the OS. Then I'm going to flash the OS to the SSD and remove the old C: drive. If it boots fine then I'll hook the C: drive back in and wipe it.
Click to expand...
Before you even start this project, check the site of the SSD manufacturer and make sure there's no pending firmware update for the drive.
It'd be a shame if you went through the entire migration process and THEN discovered there's a drive firmware update with "...applying this update will erase your drive, please back up all your data before proceeding..." 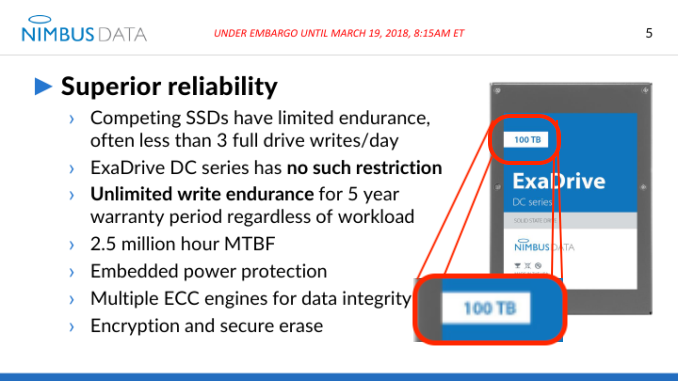 Further, it's limited to the 500MB/s write speed of the SATA interface, so you can only write 1/2 of it each day. This means that their unlimited write endurance isn't exceptional - 5 years at the highest write speed means you'll only overwrite it fewer than 1,000 times for the bigger drive, or 2,000 times for the smaller drive.

It's still only being released to "select customers" so it is truly a "if you have to ask..." situation. You only buy one if you have to have one regardless of the cost, and there are a few settings where it would be necessary, compared to a traditional 100TB storage server.

Is there anything I'm missing that should go on the SSD or I should be away should NEVER go on the SSD?
Click to expand...
Looks about right to me. Empyrion in particular gets a MASSIVE performance boost for being on an SSD, and just the act of putting your OS on an SSD is like super-slick glisteny supermodel sex.

But by and large, you have the right idea. Movies, music, photos, etc are a waste of SSD space.

Is there anything I'm missing that should go on the SSD or I should be away should NEVER go on the SSD?
Click to expand...
If you're going with Windows, I'd recommend looking up how symlinks work. Your Users folder can/should be off of the SSD entirely (that'll cover your Desktops, Downloads, Documents, AppData, etc), and it's much easier (IME) to do that without telling the OS that it's happening.
You must log in or register to reply here.
Share: Reddit Pinterest Tumblr WhatsApp Email Link
Top