Brock Lesnar returns walks to the ring, Cena extends a hand, he takes it, then hits the F-5 on John Cena, ending the show.

This didn't really need a new thread. You could've just changed the name of the other one.

So I'm slowly getting into ROH, it's not worth watching on tv, but I signed up so I can watch a stream of the show the next Thursday. I like that they don't try and be a direct competitor with the WWE, like a certain other company that's trying to make an iMPACT. Also the fact that each match gets a good amount of time.

I saw the opening stuff with the Rock. Has there been anyone since him that could get the reactions from crowds that the Rock could with just a gesture? Fit Finley has been signed by ROH for a match at their Border Wars event in Toronto.

Live Smackdown this Tuesday, because it's good for ratings.

I dont know how true Brock's statement of taking the WWE to new heights was.. were they doing very well or not?

They were on a downward slide that has lasted most of the past decade.

I love how Kofi has to fight not cracking up. God, I love Bryan.

Just ordered a Chikara DVD "A Death worse than Fate." This should be interesting.

I marked out like a bitch when Edge's music hit.

Daniel Bryan should have never taken his referee shirt off.

I am really annoyed with the CM Punk Jericho storyline. It is falling very very flat.

You didn't like the officers giving a field sobriety test in the ring (sans a portable breathalyzer) while Paul Bearer froze to death in the freezer? (why didn't anyone help him?) Or Eve pulling out the "No way Stone Cold would have ever been able to wrestle" alcohol policy from out of thin air?

poor Josh Matthews though, he was just trying to do his job.

Extreme Rules is tonight, and WWE is having a pre-show stream live on YouTube, like they did with Wrestlemania. Santino will defend his US Championship against the Miz, and the stipulation of Cody Rhodes and Big Show's Intercontinental Title match will be determined via a spin of the wheel.

No better way to sum up the pre-show. 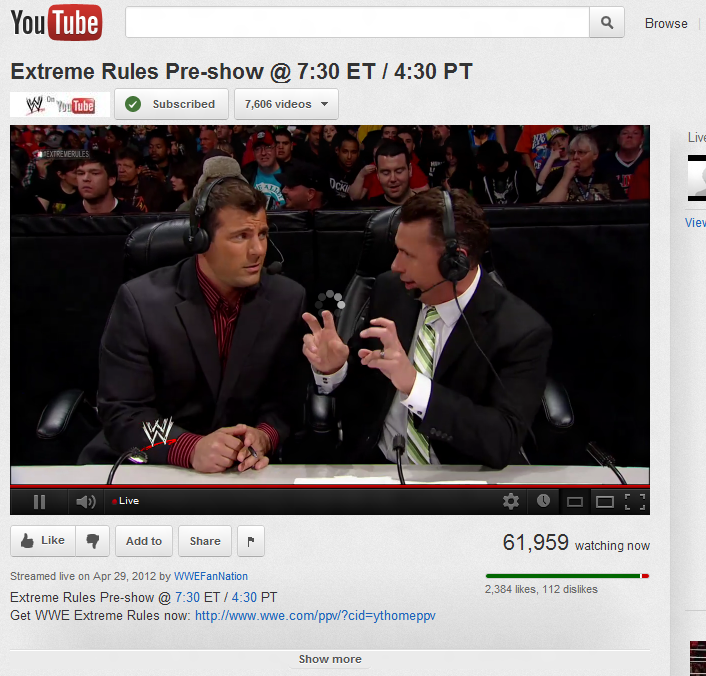 At Extreme Rules GoldbergRyback squashed two nobodies. Thanks to the Chicago fans for chanting what we were all thinking.

For those that didn't watch Raw, a referee botched the ending of one of the Beat the Clock Challenge matches, John Cena will face Johnny Ace at Over the Limit, and...

DANIEL BRYAN IS THE #1 CONTENDER FOR THE WWE TITLE!!!!

Ring of Honor will be streaming a match between CM Punk and Bryan Danielson on their website today between now and 8pm EDT. (supposedly, it's not up yet you need to sign up for at least a free account) As well as a match between the Briscoes and the House of Truth.

Chael Sonnen, middleweight MMA fighter, on having Stone Cold Steve Austin as his strength and conditioning trainer. This actually had me chuckling and I usually can't stand Chael's antics.

I hope Big Show's current angle turns him back into an angry wrecking machine.
I have been thoroughly impressed by Daniel Bryan's mic skills. Also, I can't wait to see him and Punk in the ring again. They gave us some great champ vs champ matches.
I hope the tag team division actually starts to pick up, as they seem to be foreshadowing.
Does anyone else think that Sheamus' title run is falling a bit.. dull?

So Chris Jericho was suspended 30 days for desecrating the Brazilian flag. Apparently it's considered a misdemeanor in Brazil.
Kind of unfortunate, seeing as how often flags have been disrespected in wrestling. I understand the need by WWE to show that they are disciplining bad behavior, but I'm sure had Jericho even informed the crew of his intentions, no one would have known to tell him to not touch the flag.
Flag disrespecting is nothing new to wrestling. I can remember Shawn Michaels putting Canada's flag up his nose. And Iron Sheik throwing the American flag on the ground on several occasions.

Poor decision by Jericho, but I think the suspension may have been a bit excessive. Maybe this will mean he'll stick around at least 30 days longer now

Since they're going to need to scrap their Y2J/RKO feud maybe they can have Orton feud with Sheamus. Those two being at each other's throats was the only thing interesting about the buildup for the fatal four way match at Over the Limit.

I think Big Show and Cena will be good, and I'm really glad they're continuing the Daniel Bryan CM Punk feud. Now I just hope they have Christian and Cody Rhodes in a program for the IC belt. I find Cody to be one of the most talented young guys (next to Ziggler) on the roster right now, but he still needs that "I'm credible" push.

Remember when JBL committed a crime in Germany and lost his job with CNBC because of it. He got suspended too.

No wait, he immediately went on to have a 9 month title reign as top heel of the company.

Covar said:
I find Cody to be one of the most talented young guys (next to Ziggler) on the roster right now, but he still needs that "I'm credible" push.
Click to expand...

I love watching those two, Ziggler and Rhodes, and I think they need credible opponents such as Christian and R Truth in the US and IC title pictures. I think they're still a bit young for a title reign, but I don't mean that in a sense that they don't deserve the major straps. I just would like to see the IC and US belts remain relevant instead of using it to build the current youngsters to main event level and resetting the mid-card belts to worthless..

Hell, I wouldn't mind seeing Bryan or Jericho or Orton going after those lower belts, it's not like once you've been a heavyweight champ there's no turning back And more importantly Randy Orton is suspended for 60 days for his 2 1/2 violation of the wellness policy.

All part of Vickie's plan to get Ziggler into the main event spot.