Staff member
Hell, I don't know if this is a good idea. I started wondering a day or two ago whether I oughta make a thread about this piece of my life - ie. the recent news that yours truly has cancer. On one hand, I hate dropping the "c-bomb" in rant threads because that might discourage others with legitimate rants from coming forward. On the other hand, I fear that this is terribly pretentious of me, clogging up the forum with what could be construed as a not-so-elaborate pity party.

Then again, it might be therapeutic to do this, and this way people who want to hear what's going on have a place to go, and people who don't give two shits about this can avoid this thread like the plague.

Going to the hospital again tomorrow, to discuss treatment. So far the pathologist's raport has not yet come in, but based on the preliminary results the doctors are going to start treatment within the next two weeks. Chemotherapy, in all likelihood. I wouldn't be so goddamn antsy about this, but for the possibility they want to take me in. I frickin' hate staying at the hospital; no matter what distractions I have, my mind invariably returns to the same terrible phrase: "You're here because there's something wrong with you". At least at home I can silence that thought more easily.

Otherwise... well, there's been some changes. Mostly dietary. Which, after a long run of not-so-healthy foods, have left me with some nice indigestion. But I'm getting over that.

And hey, I'm already down almost twenty pounds. Hopefully I can keep that up.

Related to that, went shopping for a bow... and found out where I could train reasonably well. A friend recommended me to a fellow medievalist who apparently supplements his income as a traditional bowyer. Might go and see what he has to offer...

*(or not so manly

*(or not so manly

It ain't gay unless our balls touch

well NR, a manly handshake of manlyness on your willingness to stand against cancer, you have my axe! you are gentleman and a scholar.

What stage is this? You have penile cancer right?

Here's the game plan for you if it's Stage I-III: surgery to remove the tumor, some topical chemo/ radiation therapy for a couple months, and enjoy your 80% survival rate.

I know it's frustrating and scary, but it sounds you've got the type of cancer that you want to get if you have to get cancer.

We got your in our prayers and thoughts over here man. Stay strong.

I would like to offer you some words of encouragement, as some of the posters here have.

But there are two problems with that.

1. I don't really know you, and do not know how you take offers of sympathy from near-complete strangers. Hence, I don't know if it is really appropriate for me to express any sympathy towards you.
2. Anything I will say might be interpreted in the worst possible fashion, as you have cancer and I don't. So the onus is upon me to figure out what is appropriate and possibly helpful, and what is not.

So I hope the multitudes of insensitiveness in this post will fire up your ire, and take your mind off of bad things for a while. You know, in case you need to lash out a bit.

Still, I wish you all the best.

Mathias said:
What stage is this? You have penile cancer right?

Here's the game plan for you if it's Stage I-III: surgery to remove the tumor, some topical chemo/ radiation therapy for a couple months, and enjoy your 80% survival rate.

I know it's frustrating and scary, but it sounds you've got the type of cancer that you want to get if you have to get cancer.
Click to expand...

I'm going to go on a limb here and take that first comment as a joke. No, not penile cancer. The pathologist's report is yet to come in, but the tumors are located in my bladder.

North_Ranger said:
I'm going to go on a limb here and take that first comment as a joke.
Click to expand...

I don't think anyones making jokes NR. Theres a couple folks going through some tough stuff on this board and its hard to keep it all straight.

Awh man, I'll add to the spaniard-hugs fund, I hope you beat your mutant factor and remain alive and well.

North_Ranger said:
I'm going to go on a limb here and take that first comment as a joke. No, not penile cancer. The pathologist's report is yet to come in, but the tumors are located in my bladder.
Click to expand...

I thought you said you had penile cancer in the rant thread? Oh well, my bad.

Jeez, I was just quoting Kindergarten Cop. I didn't mean for it to be true.

But seriously man, best of luck. We'll all be prayin' for ya. Or sacrificing something, in Shego's case.

a very manly ball grab to you!
B

I've heard that an Arcade may be making its way in the next few days (tomorrow?) so maybe that'll help keep spirits up.

And I know I joke, but you know that if there's anything I can do from a half a world away I'll do it.
B welcome to one of the shittiest clubs ever possible to join.

I'm serious though. Walk around your town without pants. When people ask you why, tell them it's part of the treatment.

Staff member
Stay strong man. It does help to just reach out and just talk about it sometimes. I'm pulling for you.

isn't walking around with no pants normal there? Why would they even ask?

Biannoshufu said:
Walk around your town without pants.
Click to expand...

On a lighter note... you will lose what ever remaining inhibitions that you have for dropping your trousers around strangers. I think I've dropped trou in front of strangers more these last 4 months than I have in the last 4 years.

But really, good luck. Keep yourself on an even keel. And do what ever the hell the Doctors tell you to... ASK QUESTIONS (they don't always know what they are doing,) get answers in writing. Shit will be flying at you very fast, and you will not retain it all.

I've got something that might help. Do you suffer from the severest toothaches? Lumbago? Gout of a most vicious disposition? Well, pardner, look no further than this cure for your multitude of ills! 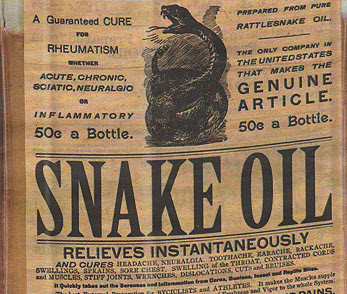 But in all seriousness, I hope it all turns out fine in the end. Hey, at least the doctors are trying to make you better. We've come a long way from leeches and snake oil.

Staff member
Heh, thanks, all... for the jokes and the cheering up. Hell, even the ball grab was appreciated.

Just came back from the hospital. The bad news is that 1.) the cancer I have is extremely rare - seriously, I'm like the fifth person in the frickin' world who's documented of having this - and 2.) they cannot operate because the tumor is too big. The good news is that I start chemo first thing tomorrow, and they will operate as soon as the tumor has diminished sufficiently. Also, there seems to be next to no metastasis.

I was warned I'm gonna lose all my hair due to the treatment, so I decided to beat that to the punch. Next stop, the barber shop for a close shave.

North_Ranger said:
I was warned I'm gonna lose all my hair due to the treatment, so I decided to beat that to the punch. Next stop, the barber shop for a close shave.
Click to expand... North_Ranger said:
there seems to be next to no metastasis.
Click to expand...

I think that's the best news you could have gotten. Now it's just a mater of shrinking that bad boy until it's small enough to operate.

And if they opt for radiation, you might get super powers.

Staff member
Naaaahhh... with my luck I'd probably get some lame-ass powers like being able to talk to fish or being able to telekinetically control asparagus.

I see a new painting is in order.

Biannoshufu said:
I see a new painting is in order.
Click to expand...

I won't stop ya

Staff member
The hair works for ya, man. I know that's no real consolation, but I'm hoping the best for you!

With hair, North Ranger, you kinda look like my friend Adam.

Best wishes NR, and I look forward to many more years of posts from you.

Fuck that cancer, dude. Fuck it hard. Fuck it up so badly, it'll go back and tell all the other diseases about how the Fearsome Finn fucks up diseases, and all the diseases in the world will avoid you for ever and ever, lest they come back as broken and useless as cancer. From this day forth, only minor colds, who don't know any better, will dare grace your doorstep.

Staff member
arrr, i likes th' cut o' yer gib, bhamv ye ol' scurvy sea dog. an' while i dost like comelier wenches than this cankerous sort, i shall take yer word t' heart and bed it like a spaniard. if'n only i had me left 'and, too, but th' physician be put a tube in tha', renderin' me speech capitalless.
Added at: 14:22
...aaaaaand i realize that the international talk like a pirate day was yesterday. tarnations.

First set of chemotherapy is behind me. Curiously, during the three days I spent in the hospital the worst thing I had was headache from being cooped up all day. Of course I could have gone outside, but autumn is arriving pretty heavily in these parts, meaning it's mostly cold and rainy nowadays. Got out Thursday, and the last two days I've pretty much slept like a log and peed like a race horse, thanks to the fact that I need to purge the systems of remaining medication. Afterall, the stuff they give you in chemo is essentially toxic to growing human cells.

Besides being tired and having equine urinary tendencies... well, I'm feeling fine. It's good to be back home, in my own bed. I'm just a tad saddened that a dear friend of mine seems to have gone AWOL on me. I can't reach her by phone or e-mail, and she is one of the few people to whom I can talk truly candidly about this, outside the immediate family. Oh well, I'm sure she'll turn up someday. All in all, feeling okay and keeping the spirits up. Not thinking about getting a wig should I lose my current buzzcut, but might go and try some on just for shits and giggles someday. Photos will be posted in that eventuality

North_Ranger said:
Not thinking about getting a wig should I lose my current buzzcut
Click to expand...

That's good. You can usually tell that they are fake.