#37
Reactions
0 0 0
ThatNickGuy said:
So whatever happened to the manned mission to Mars?
Click to expand...
Well, I think it's still in the works. With this mission, we'll be fulfilling ultimately what Carl Sagan suggested be done before any manned missions commence. That is, thoroughly examine Mars for contaminants that may or may not be harmful and contagious for humans. He likened the scenario to a reverse War of the Worlds.

In all seriousness, I've not been following this nearly as closely as I should be... the sheer amount of awesomeness that is inherent in this is just too great...

NASA's Own Video of Curiosity Landing Crashes Into a DMCA Takedown

#42
Reactions
504 140 7
Psh. We spend 2.5 billion dollars and NASA can't get HD video for us? That more than NBC paid for the Olympics and I'm sick of looking at the pores on Michael Phelps nose.

Maybe we should have NBC bid on the next mars mission.

I don't know if you have or had anything to do with Curiosity, but I damned proud of JPL and NASA tonight. Just watched the touchdown and watched as the first thumbnail images came back from the surface of Mars. I stand in awe of this accomplishment.

Well done, all of you!
Click to expand...
His reply:

Yes, we both worked on it. Brenda was a thermal systems engineer responsible for making sure the rover launched, traveled there, landed, operates within acceptable temperature zones, etc (an enormous undertaking). She had several subsystem thermal models as well as the overall model of the rover. She also did analysis for several landing zones to help determine where Curiosity should land (including Gale crater where it did land). She was extremely involved and I'm sure I'm not listing half of what she did.

I worked on one of the ten science instruments called tunable laser spectrometer (TLS) as a mechanical design engineer. The suite of instruments is called SAM which stands for Sample Analysis at Mars. TLS is used to detect methane, carbon dioxide, and water (i.e. evidence of life). I designed, analyzed, fabricated, and oversaw the assembly of several key components as well as the final alignment. As with many of the instruments on board Curiosity in SAM, TLS has the honor of being the highest precision instrument of its kind ever sent to another planet.

As you can tell, we're both excited that the landing went very well. All initial assessments of the rover and instrumentation indicate everything is alive and well. The landing was "soft" per specification relative to the rocket blast to get it into Earth's orbit and send it on its way to Mars. I can tell you that the last calibration and check out on late June showed a completely healthy set of instruments as well as the rover. So, that means everything survived being strapped to a rocket so theres no reason to believe that the landing on Mars would have caused any damage. We will know more over the next days and weeks as we begin to wake-up the rover and it's instrumentation. 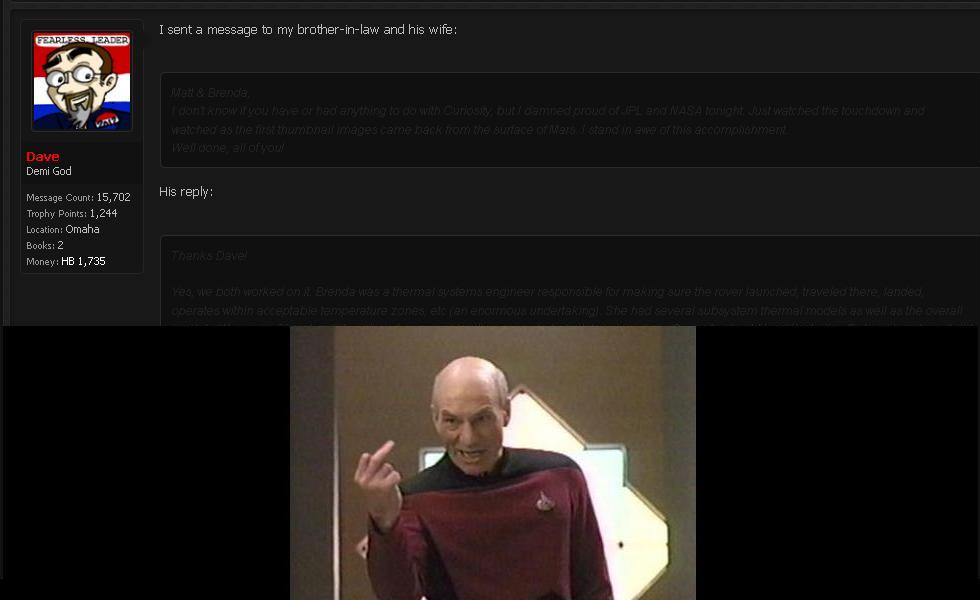 Staff member
#47
Reactions
7,775 1,663 33
stienman said:
Psh. We spend 2.5 billion dollars and NASA can't get HD video for us? That more than NBC paid for the Olympics and I'm sick of looking at the pores on Michael Phelps nose.

Maybe we should have NBC bid on the next mars mission.
Click to expand...
Reference the funny pictures thread. NASA = 14 minute delay from mars. NBC = 8 hour delay from London. You'd never SEE the pictures from mars till we were already living there. #58
Reactions
1,461 537 7
sixpackshaker said:
To the people that came up with the original slogan/bumper-sticker. "JESUS IS MY CO-PILOT"

That is quite some company to put that guy with.
Click to expand...
Unlike Jesus, Bobak actually is a copilot?

Click Informative if you want me to keep updating this thread with daily updates!

Also when the animation is over, you can use the scroll wheel to reverse. Just in case you miss something.

Staff member
#65
Reactions
2,642 1,232 23
Removed the minor squabble over Bobak. Not that it was bad or anything, but it had the chance of going off topic in a huge flaming way. If you guys disagree with my assessment, the posts were only soft-deleted and can be put back.[DOUBLEPOST=1344637649][/DOUBLEPOST]And I think daily updates would be smashing, baby!

Unfortunately, our children will be more concerned with paying off the national debt, student loans, getting jobs, etc...and that will delay the manned mission another twenty years or so...

Obviously, the first week or two will mostly consist of test after tests and once they are comfortable they will send their explorer along to visit the planet.

A must see for Space enthusiasts... gorgeous. 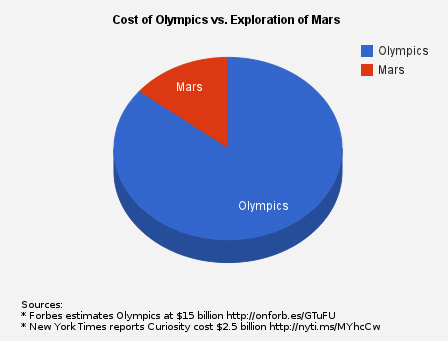 Thought about posting this in the "not funny" picture thread....

Staff member
#70
Reactions
104 0 0
Olympics also brings in money though so its not really a fair graph.